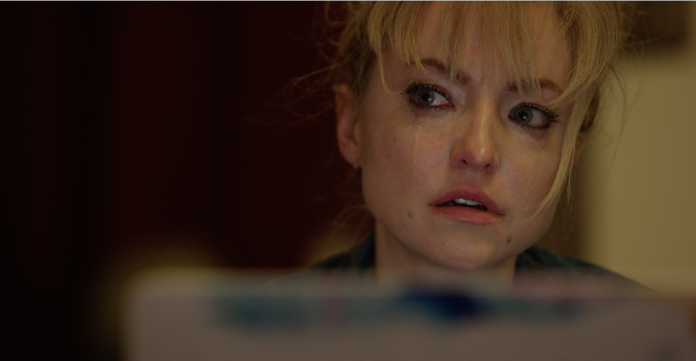 Dark Side Magazine at FrightFest 2022 – James Whittington talks with Sylvia Caminer, director of Follow Her

Follow Here is having its UK premiere at FrightFest today so we chatted to its director, Sylvia Caminer about this chilling movie.

DS: You’re a skilled documentary maker, was you plan always to movie into features?

SC: I started as a stage director and then moved into producing indie features out of New York City always with the intention of directing narrative films. First and foremost, I am a storyteller so no matter what genre I am working in it is always about finding the story and the journey of the characters. I think my background really helped me in the 2 feature documentaries I’ve made, “Tanzania: A Journey Within” and “An Affair of the heart” with Rick Springfield. I’ve always preferred docs that are story/character driven. I kind of fell into directing documentaries and unscripted TV. I heard about the unusual relationship between Rick Springfield and his fans and found it so fascinating – this tight knit community of fans that literally leave their lives to be on the road with him like a weekend a month. I interweaved the stories of several fans with Rick’s journey as an artist and there is some real drama and conflict in it. Really proud of that film which I directed and also produced with long time fan Melanie Lentz Janney and collaborator, David Dean, edited. I’d always dreamt of visiting the continent of Africa so when the Tanzania story came my way, I jumped on it and developed it into a feature doc. Another passion is travel and so it was a natural progression to make travel series, my current Emmy Award Winning series “Samantha Brown’s Places To Love” which I series produce and direct is filming its sixth season and I feel incredibly blessed to be working with such an exceptional host and team of people … and I get to travel the world!

DS: How did you become connected to Follow Her and what did you think of Dani Barker’s super script when you first read it?

SC: A mentor and dear friend John Gallagher (I produced 3 of his films – “Blue Moon”, “The Deli” and “Men Lie”) introduced me to Dani. Right away I saw the merit of the script and the overall power of the journey of the female lead. I’d been reading scripts specifically looking for something commercial in the genre world and really thought I could bite into this. After speaking with Dani I could tell she was a true collaborator and very open to workshopping the script. We spent about 10 months developing it and broadening the story – we brought in the live-stream element and also spent a bit of time with the beginning and final 15 minutes. Dani is a very talented writer and it was great fun working with her and I hope this is just the first of many projects we collaborate on.

DS: This is your debut feature film as a director, were you nervous the first day on set?

SC: Oh hell yeah I was nervous! I don’t think I really slept the night before but that was also due to the fact that at about 8pm suddenly the weather forecast was calling for heavy rain. The perfect way I planned to start on our first day of filming was getting screwed up! Instead of starting with the scene in the park where Jess and Tom meet, I would now be forced to film the erotic bedroom scene – a scene I had not at all prepared for and neither had the actors or the DP but it was the only set the art department could have ready with such little notice. Once I got on set though there wasn’t time to be nervous, I had to rely on all the preparation I’d already done.

DS: It has some really cool technology moments such as watching Jess’ interactions, were they hard to achieve?

SC: Holy shit I don’t think I ever want to make another film with over 200 graphics! It was truly daunting but the phenomenal Alex Noble and his company, Wild Union Post, really guided the process and were quite patient and really delivered at a high level. My kick-ass D.P. Luke Geissbuhler is such a resourceful and passionate cinematographer and nothing phases him, hell he shot the “Borat” films! We spent a lot of time discussing and planning/testing all the different cameras we would use to capture everything. I also have to give props to my editor, Alex Gans! Alex had the ability to design temp GFX so we could edit around things and feel the timing before we got the actual effects from Noble’s team. Alex is also so good at bringing out the best performance moments and never losing sight that we are making a THRILLER!

DS: The main location of the shed is key to the movie, where did you find it?

SC: I knew I wanted to shoot in the Hudson-Valley and so we really only looked there. Dani and I started searching airbnb and vrbo as we were working on the script. Once we found “Barn On The Pond” in Saugerties we were sold and there was never a question that this was the ultimate main location to anchor the film! We met with the owner, Tripp, and it was such an amazing partnership! Heck he even became a small investor in the film and his property manager worked in the art department! I absolutely love the Woodstock/Saugerties area. It’s such a pleasure filming and spending time there.  I graduated from SUNY at New Paltz so this felt a little like coming home, especially as I was born and raised in NYC.

DS: Dani Barker and Luke Cook are electric together in this movie, did they have much rehearsal time?

SC: We had just 2 days of rehearsal.  I thought it would be really important to at least get it up on its feet a little and build the beginning of a rapport and a safe space for them to work. I also wanted to block a lot of the action in the barn so that we could pre-light etc. We only had 9 days to shoot all of the interiors and exteriors of the barn so I knew we would need to move quickly! Their chemistry really is electric I believe filming the erotic scene first may have gotten them there right from the gate.

DS: You seem to ramp the tension up effortlessly, how hard was it to achieve this?

SC: I spent a lot of time thinking about nothing but tension and how to bring it and also keep it percolating. I knew at a certain point I would need to keep it ramping up without reprieve and for this particular story I thought a great way to achieve that would be to let the audience know more than the protagonist, it’s kind of like letting us see the train wreck way before Jess. Hopefully this makes the viewer want to scream “stop don’t do that or get the frig out of there” Hitchcock is a master at this! So, I certainly borrowed some of those techniques from his films. Luke, my D.P.  and I studied a few shots from films like “The Shining” and “Don’t Breathe” and I even showed Luke Cook a specific moment from the Herzog/Kinski remake of “Nosferatu.”

DS: It’s a bold film with a very strong message, how harmful do you think social media can be?

SC: Like most things that are addictive it can be harmful if we place too much importance in it. This is something we explore in the film as the lead character, “Jess” finds her self-worth and financial means by putting herself out there on social media. This leads her down a rather dark path. Dani the writer/star and I talk about this all the time as neither of us are big fans of social media but because of the film and needing to build awareness we have to try and be active. Initially this was quite difficult and made me a bit anxious because frankly I’m not very good at it but the more I use it the more I realize it is such a time suck and you could very easily get sucked down that rabbit hole.

DS: It has many dark themes running through the movie, did this make the shoot a very serious one or was there time for fun?

SC: There was definitely time for fun! I have the philosophy that a happy crew works at a much higher level. I think I really learned this from my early days as a P.A. and Assistant Director – I’ve never believed in an overly serious set, sure there is a job to be done but after all we aren’t saving lives here. I am not interested in working on projects that are not enjoyable – life is too precious and short to not enjoy the journey.

DS: Will you be nervous when the movie has its UK premiere at FrightFest 2022?

SC: Gosh without a doubt! I have a really hard time watching my work. I get anxious and can’t help but pick it apart. I imagine FrightFest will be even more so because this is a BIG festival for us, I was incredibly excited when Alan Jones reached out to let me know how much he liked the film and wanted to include it! So, I have literally been counting the days for many many weeks. I think my best opportunity to enjoy the screening will be to sit towards the front so I can’t watch the audience and can only feel the response from behind me.

DS: This is such a confident debut will you make more psychological thrillers like this, or would you like to try other genres?

SC: Yes, most definitely! I am not a visitor to the genre world I plan to stay in it but also venture out for heightened drama and other good stories.

DS: We’re seeing more and more woman behind the camera, apart from yourself which emerging talent should we look out for?

SC: It is definitely an exciting time as there are so many fabulous female filmmakers getting films made! To name just a few In the genre world – Nia DaCosta (“Candyman”), Leigh Janiak (“Fear Street” trilogy), Hanna Bergholm (“Hatching”), Carlota Pereda (“Piggy”) and I’m also inspired by Greta Gerwig, Chloé Zhao, Emerald Fennell – “Promising Young Woman” was certainly a bold first film! And Sian Heder’s “Coda” was such a beautiful and heartwarming film. There are so many others as well.

SC: I am incredibly excited to be working with Producer, David Higgins, on a new script “It Walks Among Us” by London writer Will Davis. It’s a heightened horror film – very character driven with a lot of heart but also quite scary. Dani and I are also working on part 2 of “Follow Her”. We envision this story as a trilogy so that’s great fun as we will write those scripts together. I also want to focus more on my writing as I have a couple of scripts I’ve written which need some polishing and I am working on a few horror/thriller ideas I hope to pen in 2023.