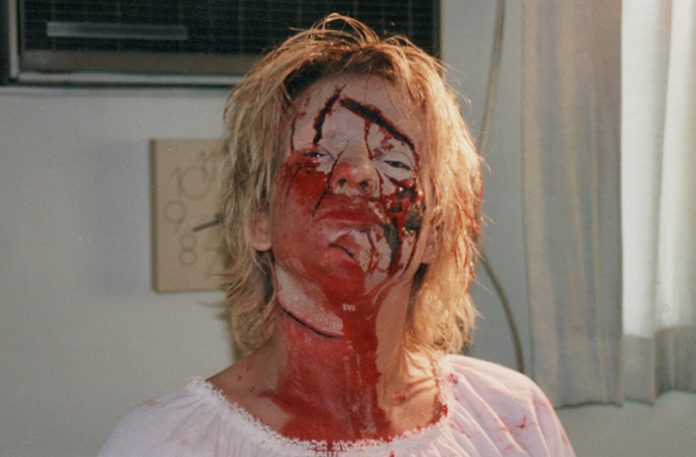 There has to be something said for literal movie titles. Snakes On A Plane, Piranha 3-DD, Mega Shark Vs. Giant Octopus, White Christmas. Total transparency: you gets what you pay for. No extra-textual meaning (Straw Dogs), no coy questions (Guess Who’s Coming To Dinner?). Perhaps the most authentic title of all is Bad Taste, gleefully encompassing a whole plethora of questionable activities such as vomit gobbling, chainsaw rebirth and exploding sheep. Whilst not quite in the same league, we can certainly add Unspeakable to the category.

The plot is fairly redundant. After a car accident leaves his wife horribly disfigured and daughter dead, James Fhelleps’s screws begin to loosen. Impotent and robbed of the person that meant everything to him, Jim takes to the streets with a razor blade slicing and enticing indiscriminately, hoping that Heather will continue to appear to her daddy whilst his victims are in the throes of death.

The murders themselves are reasonably bloody, with grainy flashes of élan indebted to Dario Argento: a hooker’s stomach squirts its circulation across a long window pane; another slut has her brains dashed out against a glass coffee table, Jim rubbing her face in the mess, the camera underneath. But it is the many other, absurdly unspeakable acts that happen incidentally to the homicidal spree that make Chad Easter Bunny, Kill! Kill! Ferrin’s debut feature worth a night in the gutter for.

The wheelchair-bound, catatonic Alice Fhelleps, with a face like a bruised potato, spends her hours following through when breaking wind yet her nurse never bothers to clean it up, preferring to bury his face in the dung-smeared crotch as foreplay to cheerful rape: “I’m gonna turn that frown upside down.” Deplorable! A local priest whips a topless boy with rosary beads demanding that he “Repent!” as a portrait of a clown looks on. Despicable! All this in a town where porno whores boast about shagging poodles and urinating on pre-pubescent weenies and strangers compare killing dogs to smoking: “First it’s one, then two, and before you know it you’re down to a pack a day.” Abominable!

Distributed by none other than the sacred Troma, this seedy, mordantly offensive slide on the wild side takes a binge and purge approach to its depraved indecency, especially in the final act. Amidst all this, a tramp spits on the camera lens, perhaps disgusted that anyone would watch such filth. Unspeakable is as Unspeakable does.