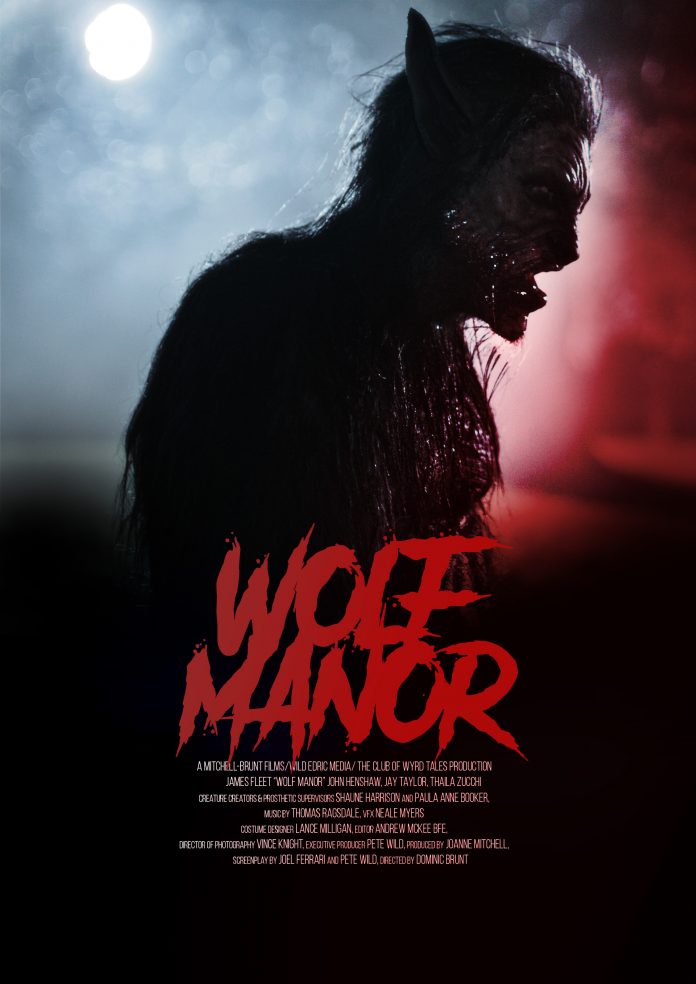 Dominic Brunt is back at FrightFest with his most fun movie yet, Wolf Manor. This hilarious and gory entry into werewolf movies will satisfy lovers of creature features and fans of well-paced horror. We chatted to him before the world premiere.

DS: Here we are, another FrightFest and another Mitchell-Brunt movie, are you aiming for the record for most movies shown?

DB: Well, it’s been an amazing privilege to be supported by the chaps at FrightFest. I know they are very loyal to British film makers in general. However, we have had shorts and a feature film turned down in the past so it’s never a given.

DS: How did you become involved with Wolf Manor?

DB: Pete Wild and Joel Ferrari had written the script and had a budget attached. Pete had worked with Andrew McKee (editor) on some shorts and documentaries in the past and was on the lookout for a director. I’d also worked with Andrew who put my name forward. It’s the first time we’d been hired in on an existing project which was already up and running. I was absolutely drawn to the simple genre story of lining up 10 unfortunate FX kills, and a werewolf designed by Shaune Harrison and Paula Ann Booker. Pete Wild was extremely professional, and the DOP was Vince Knight who was an expert at lighting in the dark. I just crossed all my fingers and hoped to get the job.

DS: The cast are superb and in particular James Fleet playing aging thespian Oliver. What’s it like directing someone with his acting pedigree?

DB: I was really nervous as he is part of English culture. We both have engineering backgrounds, so we already had a bond and something in common. He made the whole process fun and creative and lifted the script off the page, as all good actors do. I couldn’t believe we had him onboard and he was an absolute gentleman. We’ve been very lucky. Other than James it was good to bring back some regulars from Mitchell-Brunt Films. I like working with people I trust and who I’ve worked with before. You know you’re going to get quality again and I like to remain loyal. Also working with John Henshaw again after 20 years was a joy.

DS: The creature design is excellent; did it take long for it to look right?

DB: I’ve always work to the rule that if someone is an expert at what they do, leave them to do it. Shaune Harrison’s IMDB page speaks for itself. He worked in partnership with Paula Ann Booker in bringing about a terrifying creature. Massive, hairy, detailed, clever, repellent. Just brilliant world class work.

DS: There’s plenty of acknowledgement to other werewolf movies, do you have a favourite moment?

DB: It was a joy to make from start to finish. Obviously, as all films are, also a screaming nightmare logistically but still a joy. I love all the gory stuff. It brings out the kid in everyone. I do try and concentrate on the small drama between people as much as the big set pieces, but you can’t beat a good FX stunt which goes right. There were loads over the weeks of filming and mostly practical one-shots (with a little CGI augmentation from the genius Neale Myers).

DB: Apart from the prequel/end credit sequence, we filmed everything within 10 miles of the Manor House in Ludlow. Stunning part of the country and a beautiful old house. The Manor House was due to be totally refurbished so we had the freedom to do what we wanted, apart from structural damage. Myself and my wife Joanne (producer of Wolf Manor) also managed to rope in our teenage kids so we could be together for some time. Runner and Pest Control credits were gifted by Pete Wild and they were thrilled.

DS: The effects are bloody and gruesome; do you have a favourite special effects moment?

DB: The cellar head loss (you’ll have to see it) was a particular high. We rehearsed and rehearsed this one-shot FX sequence so many times. The time to reset, if it went wrong, was not worth contemplating. It involved a decapitation, full costume werewolf attack with blood pumps and body doubles. The cheer which went up during the playback brought a lump to my throat. A proper team effort.

DS: There’s a beautiful moment where Oliver is playing with cup and ball props, all very innocent but magical, was that scripted at all as it feels so natural?

DB: That was a lovely part of Pete Wild and Joel Ferrari’s script which I was keen to get right. I knew what they wanted, but it took a bit of planning and 200 red balls to pull off. It’s a tiny joke but a good one, I hope.

DS: Will you be nervous when it has its World Premiere at FrightFest and will you watch with the audience?

DB: My nerves will be the death of me. The nerves of a first showing in front of a paying audience are only matched by the viewing of a rough cut/assembly cut from your editor. Both are the culmination of a year’s work boiled down to an hour and a half of tooth clenching at a laptop. I’m lucky to have been blessed with good editors.

DS: Will Thomas Ragsdale’s score get a release?

DB: Tom has his music all over feature films across the world in documentaries and feature films. He rarely scores a film from scratch, so we are in a unique position to be his ‘house band’ and he is dear friend. The man is a genius. He lives and breathes music. I don’t doubt that the score will see the light of day.

DS: Do you have a favourite werewolf movie?

DB: The same as everyone else!! American Werewolf and Dog Soldiers, The Howling, Company of Wolves, Ginger Snaps…erm…Teen Wolf. We could only dream of being included in some way in the canon of werewolf films out there. We do have the gore, James Fleet and an incredible werewolf, with a super zippy script to help us along the way.

DS: The movie has a keen twist of humour to it, how hard is it to balance this with the horror?

DB: We ignore the humour and let the audience find it. It’s a little frustrating being called a comedy-horror in some corners when we really are not. There’s humour in there but we are a horror movie. A werewolf film first and foremost.

DB: So, what are you up to at the moment and will you have another movie ready for FrightFest 2023?

DB: I need to sleep. It’s been a hectic couple of years and just as we were going to take a year out from production, one of Joanne’s projects has been greenlit and will be the biggest film we’ve been involved with to date. All good fun though and we’ve been so lucky.