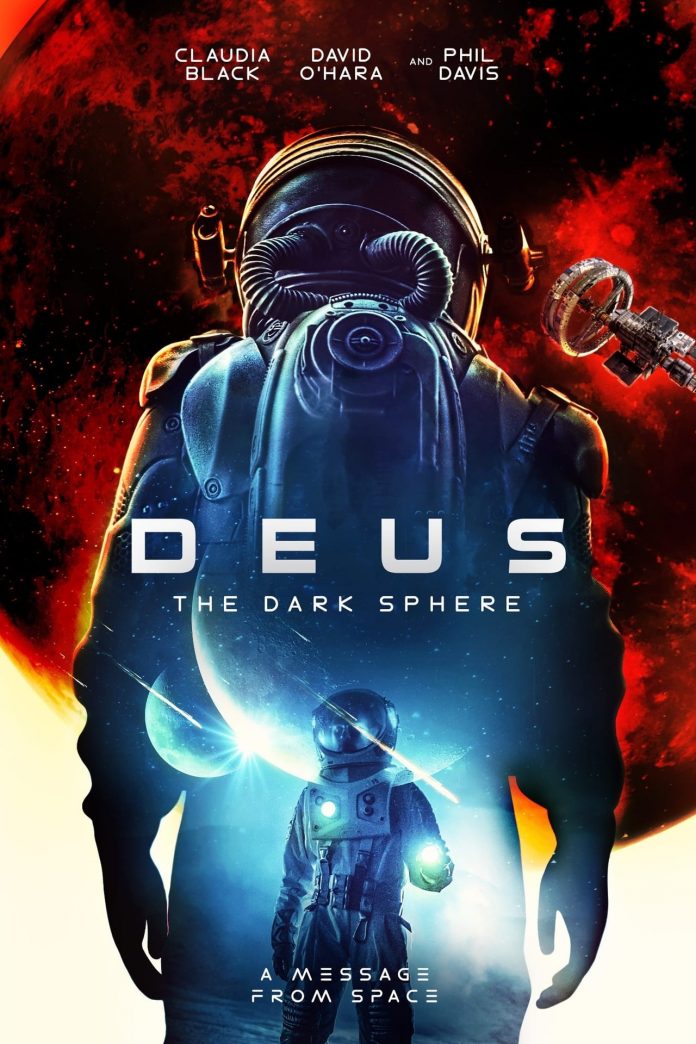 3 stars
4Digital Media. US release: DVD and Digital. Out Now
Claudia Black has plenty of science fiction on her CV, from Farscape to Stargate SG-1 — so no surprise to see her headlining Deus — a new U.K. production. It’s a shame this isn’t very good.
We are in yet another future where the Earth is dying. Black plays Karla Grey and the film opens with her recalling her last time with her daughter and mother, just before they were killed in a car accident.
With nothing to keep her tied down, Karla has shipped out on a exploratory space mission. Awakening from hyper sleep, the six person crew have reached their destination — a mysterious black sphere has appeared orbiting Mars. Scanning reveals very little, but then it begins transmitting one word “Deus”, or if you will “God”. What does it mean?
Things start to go awry as this discovery affects the crew in different ways. Si (Branko Tomovic), who is on-board to blog about what is happening (it’s the modern way), begins to freak out and ends up attacking one of his fellow crew-members. The commander Sen Paul (played by Hollyoaks and Eastenders alumni Richard Blackwood) seems to know more than he is saying and Phil Davis pops up as their Earth contact, via holographic video link.
When Karla discovers a structure on the surface of the black blob, they decide to land and investigate further. Who will survive and what is really going on here?
Reasonably well put together by writer/director Steve Stone, this has intriguing and interesting ideas to explore, it just a shame it is presented in a such a dull and unexciting way, with lots of shots of the spaceship drifting towards the sphere and too much talking by the actors involved and little action to thrill. It never really escapes the fact that it reminds you of many other better films with shades of 2001: A Space Odyssey, Event Horizon, Alien and many others.