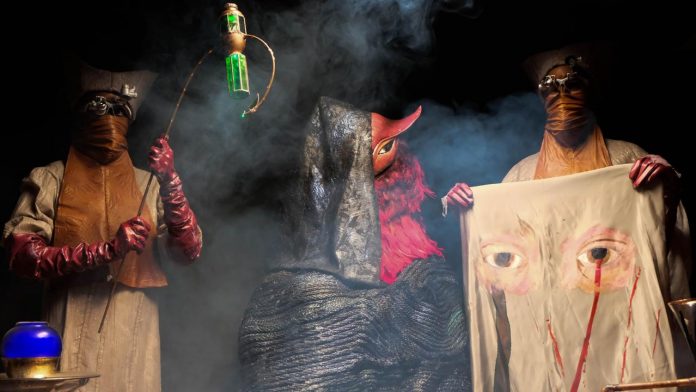 The first full day on the Main Screen at FrightFest 2022 delivered paranormal thrills as well as some Sci-Fi chills and naughty 56goings on as the event moved up a gear.

The European premiere of Mali Elfman’s debut movie Next Exit gave the audience what they needed, a gentle and considered piece which would set them up for the day. This take on what could be waiting for us in the life beyond and the acceptance of death took us on a road trip of discovery with a solid mixture of heartfelt self-awareness and humour. Katie Parker and Rahul Kohli keep the atmosphere and tone light with their interactions but there was a serious and subtle tone throughout.

Another European premiere was next up, Andy Mitton’s The Harbinger which was an emotional and heartfelt excursion into nightmarish visions all held together by a superb central performance from Gabby Beans. Being set within a pandemic and relying on the premise the main character is possibly losing their mind, the film effortlessly mixes dreams, fears and proves that Mitton’s last movie, the equally fine The Witch in the Window wasn’t a fluke.

One of the most talked about movies of Day 2 was A Wounded Fawn, the latest movie from Travis Stevens, the guy behind the gloriously gory Jakob’s Wife. This is a dreamlike game of cat and mouse as a serial killer meets his match via surrealist art and Greek mythology. OK, this doesn’t sound like your normal slasher, and it isn’t and all the better for it. The whole movie is beautifully shot with wild segways and brutal violence. Josh Ruben and Sarah Lind are electric on screen giving an unpredictability to the whole piece. Loved this movie.

I love Brea Grant, she’s a creative who is leading the way in her chosen fields and last nights world premiere of Night Sky shows exactly why she’s also one of the finest performers out there. Directed by Jacob Gentry this is a considered mix of Starman, ET and 1970s road movies all with an added adult edge. Grant is an alien trying meet her rendezvous with her race, AJ Bowen plays a lost soul who is trying to redeem himself and on their tails is a crazy killer played by Scott Poythress. The film, though fantastical thanks to its Sci-Fi themes keeps itself grounded due to dazzling performances and I must admit I had something in my eye during the final few minutes. I’m turning into a real softie in my old age!

Back in 2017, FrightFest brought the incredible zombie flick One Cut of the Dead to the screen. This smart revamp of the zombie genre was rightly applauded and so any remake of the title would be met with more than raised eyebrows. So, it was with some trepidation we watched Final Cut last night, a French take on the movie written and directed by Michel Hazanavicius, a far cry from his most famous movie, The Artist. Though his heart may have been in the right place this did fall a little flat in places and some new plot strands have been added the movie lacked impact and the sense of fun the previous movie contained. You can only be original once as they say.

The night finished with the world premiere of an anthology from Jake West, Airell Anthony Hayles, Andy Edwards, and Ludovica Musumeci, Midnight Peepshow. Here, a businessman views three stories of tormented souls who are connected to a dark website. This psychosexual fantasy is, as you’d expect beautifully shot and delivered at a pace but lacks the hook portmanteau horror needs and some of the twists and then major twist did seem a bit forced. There’s a talented team behind this movie so hopefully there’s a second look into this peepshow to show the world exactly what they can deliver.