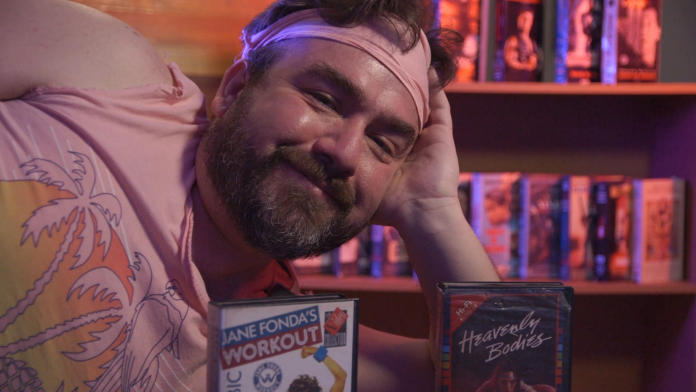 Dark Side Magazine at FrightFest 2022 – James Whittington catches up with Rob Preciado, director of Cult of VHS

The glory days of VHS are reflected on in the superb documentary Cult of VHS which is showing todays at FrightFest. We chatted to its director Rob Preciado about this look at a beloved format.

DS: What was the first VHS tape you recall renting?

RP: I have a clear memory about watching VHS as a kid with my next-door neighbour that had an actual VCR. It was a double feature of Texas Chainsaw Massacre Part II and Nightmare on Elm Street II. Later on, when my family had the opportunity to finally own a VCR, the first night at the video store we rented Masters Of The Universe for family movie night. The next night I introduced my younger brother to Evil Dead which got a bit too intense at some point of the film that we even had to eject the tape to absorb what the hell we were watching!

DS: Where did the idea for this doc come from?

RP: I´ve had this idea for quite some time, but during lockdowns I was having these depression episodes that somehow triggered the need to dive into this subject in order to gain some sanity. During Pre-production as I started to find and get to know this amazing and eclectic group of people, I knew right away that we might have something special there. I also knew very early on I wanted to make a feel-good film while at the same time presenting a global view on the format and the stories the people shared from different countries. At that stage of production, I had the luck in meeting Aaron Truss (Producer) who I connected with instantly since he´s also a documentary filmmaker and as passionate as I was about film and VHS.

DS: When I was growing up, I wanted to work in a rental store as it seemed such a cool occupation, did you feel the same?

RP: Of course! Me and my friends were hanging out at the video store all the time! It was just like a scene straight out of “CLERKS” or “MALLRATS” everyday!

DS: The best thing about this doc is that it interviews true fans from across the globe, apart from collecting VHS did they have anything else in common?

RP: I think at the end of the day, it was so interesting finding out that we all have so much in common. We all share the same stories and emotions as we discovered those films that resonated with us. It´s so satisfying hanging out with this group of people while sharing their movie obsessions and connecting instantly with them. For me it is about bringing people together… it´s all about human connection.

DS: Was there anyone you wanted to interview but couldn’t get hold of?

RP: Definitely yeah, at one point while we were tapping into the Video Nasties, Kevin Proctor (Producer) mentioned he had contacted Martin Myers, Son of the legendary distributor Michael Myers and an interview was scheduled for us. I was so excited to share his experiences and take on the Video Nasties and at the same time tell the story on how John Carpenter took Myers name to baptize “The Shape” in “HALLOWEEN”. Long story short, the day of the interview one of the crew members tested positive and the interview had to be cancelled.

DS: What’s your opinion of the Video Nasties era?

RP: For me it´s just fascinating… I mean, as a young kid discovering these films in Mexico and reading in magazines that this or that particular film was banned in the UK, for me it was mandatory; It was like: I need to find this tape and watch the film. Since we didn´t have that kind of censorship and also the fact I lived right on the Mexico/US border growing up, that certification became more of a stamp of approval for me. For Cult Of VHS I wanted to be respectful and not feeling like and outsider with this particular subject. So, in that sense the film has this cool and subtle British vibe that makes the documentary genuine and more honest.

DS: This VHS era influenced so many film makers to pick up cameras and make their own movies, do you think that guerrilla era is now lost forever thanks to streaming etc?

RP: As much of not liking that idea too much I agree with you. Nowadays it seems that a lot of young people are pursuing filmmaking or being a DP because it´s just so damn sexy, I don´t know exactly how to explain it, but I know exactly what you mean about the guerrilla style not being so popular right now. Talking about how VHS influenced a whole generation, I remember one day just after having a double feature of “BAD TASTE” and “EL MARIACHI” grabbing an old VHS camcorder and a mask and literally going outside with my brother and some friends to shoot a short film. For me as a filmmaker and storyteller (VHS) it was so formative. It just felt right and inviting to get our hands dirty and experiment.

DS: We have seen the VHS retail market slowly begin to increase, much in the same way as vinyl has, do you think this will continue?

RP: I really don´t know at this point, but what I could tell you is that we´ll always have a need or a market for some sort of physical media. Hopefully with these kind of documentaries, a 10 year old kid right now that has always lived with streaming, 10 years from now can discover there were other options or video formats and there was this mythical place called the video store. The question is: Will they even care?  Will that kid find that concept exciting enough?

DS: What’s the best VHS movie which has yet to have a DVD/Blu-ray release?

RP: For a long time there was “Spookies” right? But finally, I own a Blu-ray copy thanks to the guys at Vinegar Syndrome. There was also this insane 90´s film starring Christina Applegate called “Vibrations”. I just found out there is a very expensive DVD for sale on Ebay right now, I thought that movie just existed on VHS!!! Anyhow I´m just so happy that companies like Arrow, Severin, etc are putting out on Blu-ray these obscure and fun movies that I recall at least watching those amazing covers on Mom and Pop shops.

DS: Which VHS release do you think had the biggest impact on the market and which one is your personal favourite?

RP: It´s funny, once I read somewhere that “The Lion King” was the most selling tape of all time, they made and sold more than 30 million tapes! Would you even imagine that? On the other hand, what I find really interesting is that back then at the videostore you could have the latest Tom Cruise blockbuster next to a cheap Mad Max Italian rip-off or even take “JAWS” or “SCREAM” they would have their own low-budget counterparts and at the end of the day you would choose the movie most of the time based on the cover. I guess the field was levelled more than ever. Another fun VHS fact boys and girls is that the film, ‘’A History Of Violence” by Cronenberg was the last VHS ever made. Just wanted to name-drop Cronenberg and at the same time leave you guys with the mental image of a shooting star with a trace of rainbow picturing in your head “The More You Know” logo. My personal favourites would be definitely: “EVIL DEAD”, “BAD TASTE”, and “EL MARIACHI”. Just because they were so rough around the edges and so damn innovative! Also, as a young aspiring filmmaker that dream felt attainable watching those VHS tapes over and over again.

DS: Will this doc get a VHS release?

RP: You bet! right now I´m trying to make some VHS copies out of the digital file just to experiment but yeah, I hope we can find a distributor that would be interested in giving the film a release that would include different forms of physical media including VHS.

DS: Do you think in this age of streaming that we are spoilt for choice and therefore underground classics which would have had a release on VHS are missed out?

RP: In a way yeah, but on the other hand we have these platforms like Shudder or companies like Arrow, Severin etc that keep that sense of discovery still alive. I mean, for us that rented films on VHS, the guy behind the counter most of the time had the role of a curator without us being even aware of that. Nowadays we might find that with podcasts. I think in the future with all of the media bombarding us with films, series, music etc. podcasts will be essential if we still want to stumble upon that hidden gem. And again, currently I think shudder is the perfect example of a platform that is well curated and somehow feels that the spirit of the guy behind the counter is living inside their Ai and algorithms.

RP: Right now, I´m so excited the film is going to be presented on the big screen in different festivals. I cannot believe we are having our world premiere in London during Frightfest! It´s absolutely insane! As for new projects, I have a few fun ideas for Cult of VHS 2 and even have a basic structure for the film. It would be a matter of testing the film out and see how audiences around the world react to this labour of pure love. I´m also developing some ideas on a feature that would be partially shot on VHS that deals with astral projection and other project that would be my take on the Giallo genre.

RP: It was my pleasure!