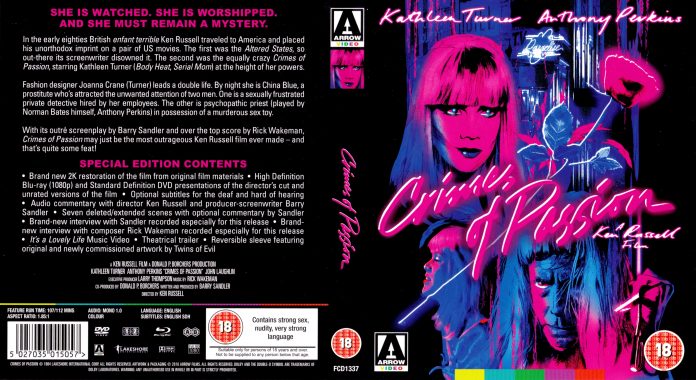 Perhaps prostitute China Blue’s most representative outfit is one of a cerulean satin dress coupled with a blonde wig, a raunchy incarnation of Lewis Carroll’s most famous creation. She certainly roams an X-rated Wonderland of leering cats and tweedling dummies in Ken Russell’s pop-porn noir: it could be subtitled Alice Through The Fucking Glass. And mirrors play a key importance, items to casually reflect surface appearance but also aid reflection, their viewers able to confront what lies beneath.

Bobby Grady (John Laughlin) is undergoing marital strife, seeking solace amongst a group of similarly troubled spouses. A colleague believes he has an industrial spy amongst his ranks suspecting it to be prim, dowdy Joanna Crane (Kathleen Turner), and asks Grady to tail her. He discovers that she leads a double life, but not one of a secret agent: at night she transforms into living doll China Blue.

He begins to grow obsessed but has a rival for her affection, Peter Shane (Anthony Perkins), a deranged, neurasthenic preacher. The femme will certainly prove fatale, but for whom?

Written by Barry Sandler, the script is baked in salt, China Blue never forgetting a face that she’s sat on and purring to Grady that “if you want to get into my panties, there’s already an asshole in there.”

But is that scarring part of Joanna’s biography or another role she plays, like that of a licentious nun, bouncing on a bed singing Onward Christian Soldiers for the benefit of Reverend Shane? For his part, the missionary feverishly admonishes her for her wicked ways, intoning that he has a greater truth to give her than a hard-on – “Depends on the hard-on.” As China continues to goad his repressed libido, the two-bit preacher snaps and calls her a “little cuntfucker”: “At least I can stay in character,” comes the dry response.

Crimes Of Passion holds a jagged prism to the desperate pretence(s) of its three main characters, detailing with varying levels of burlesque what happens when they are peeled back. China’s roleplaying is a nigh-impregnable defence mechanism, only lowering when an aged, wheelchair-bound client, her time purchased by his guilt-ridden wife, unable to sleep with him since he was diagnosed, refuses her offer because he cannot be unfaithful: “I admire your courage. You’ve stopped pretending,” she tenderly says, removing her wig.

Fidelity equated with honesty. Grady’s marriage to Amy (Annie Potts) has become a sham, the desire awoken in him for China emphasising their lovelessness. Yet he demands veracity from Amy, which she hurtfully gives, whilst scared to admit his own truth of infidelity: once he faces that fear, to his self-help group, a light in the background is framed as if giving him an ironic halo.

In hysterical contrast, Shane’s erotomania threatens to annihilate his deranged Bible-Basher schtick throughout, nervously snorting poppers and watching girls from a peep-show booth before imagining them dead, either as a brained stripper or blow-up doll with blood bubbling out of its vacant mouth. Cradling a silver, sharpened vibrator in his satchel as an instrument of death, it is brandished most threateningly in the meta-maniacal climax: having been pained and tormented throughout, Perkins dispenses with the charade of the reverend for that of Norman Bates, and experiences a wild liberation. Perhaps that is the most honest part of the film, witnessing an actor finally succumbing to the psyche of the role that both defined and typecast him at the expense of his own ego (Perkins was an ordained minister).

Despite the unhinged crash zooms and implacable editing, Crimes Of Passion ripples with dolour through its quieter moments. When Grady calls China and asks if she’s alone, an “Ain’t we all?” is drawled. Intimate shots of characters sleeping underline their solitude, China foetal and without duvet, the overhead camera distant from her; Grady and Amy stippled with the interference created by the shadow of a net curtain. For all its prurient Wonderland stylings, Crimes Of Passion is classical noir at its lonely, broken heart.

Extras: Interviews with Sandler, providing plenty of context, and Wakeman, who amusingly recounts that Perkins thought the sex toy props were useless and brought his own; Commentary with Russell and Sandler, the director brimming with phlegmatic observation about how much of themselves the actors brought to their parts: Perkins did amyl-nitrate take after take in his peep-show scenes; Russell thought Turner so convincing in the ‘rape’ scene that it was his belief that she had actually been abused by her father; Exclusive MTV music video. JK.