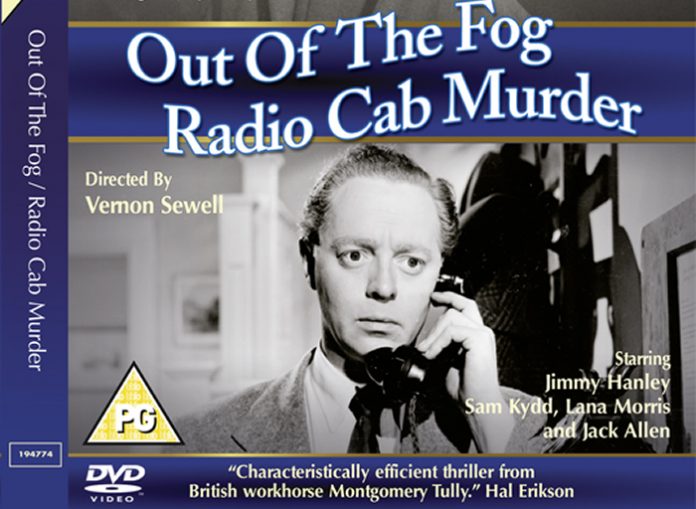 I felt in need of another equilibrium-restoring nostalgia fix the other night and so I retired to bed with Bovril and hobnobs for a midnight movie double bill of British B’s courtesy of Renown Pictures. The movies in question were Out of the Fog and The Radio Cab Murders, deservedly obscure titles from an era when the term quantitive easing meant letting your belt buckle out a few notches. Out of the Fog is ostensibly the main feature and it opens in the warden’s office in a very low budget prison, where a young inmate named David Sumner (George Mallon) gets a final lecture from the head man before being released into the outside world. Sumner doesn’t so much have a chip on his shoulder as a whole sack of potatoes, and even the chaplain gets a knockback when he tries to stick his ecclesiastical oar in.

But our young lag gets some help despite himself when he’s met at the prison gates by a kindly old chap who runs a guest house for ex-cons trying to make a new start. Given free room and board and as much porridge as he can eat, our boy is still a bit humpty with the world, and it takes him a while to get friendly with the other boarders, one of whom is our old Hammer horror friend Michael Ripper. In the meantime he strikes up a relationship with local girl Susan (June Lock) and takes her down the coffee bar. But she cools on him when she learns he’s been a wrong ‘un in the past.

But here’s the thing. There’s a murderer on the loose who is strangling young women every full moon, and Scotland Yard is baffled as always. Pipe and slippers Superintendent Chadwick (John Arnatt) and his stolid, sense-of-humour-bypass assistant Daniels (Jack Watson) think the killer may be one of the ex-cons at the guest house. The one who stands out like a contraceptive machine in The Vatican is David Sumner. The only way to trap him is get a sexy blonde policewoman to chat him up come the next full moon, and if she ends up with eyeballs bulging then Bob is your father’s brother (old police term).

Efficiently directed by Montgomery Tully (Battle Beneath The Earth), this is a decent enough little programmer in which a good cast manages to flesh out a very thin script. Despite the title there are no foggy atmospherics and the murder scenes take place off camera. The end twist is not bad but the real killer’s identity isn’t too hard to guess and the whole affair is wrapped up in such a perfunctory fashion that you could miss the lot of it with a badly timed loo break.

Moving right along we come to The Radio Cab Murders, starring Jimmy Hanley, a round-faced friendly fellow who found TV fame in the 50s as the genial host of a small-screen soap called Jim’s Inn and was later clawed to death by a monster papier-mache crab in Hammer’s The Lost Continent. He makes for a most unlikely action hero, but that’s what he’s supposed to be here. Our Jim is Fred Martin, a former safecracker who has said g’nite to geli and has taken up the more honest pursuit of driving a London taxi. Well, I say honest but we all know they take unsuspecting tourists the long way round. He’s also managed to pull the sexiest bird on the taxi switchboard and marriage is on the cards as soon as he learns to stop saying “Where to?” when they jump in bed together. Only they don’t do any such thing onscreen because this is the 50s and Jimmy smokes so many fags he probably couldn’t manage it anyway.

Fred is out driving one day when he spots a woman running out of a bank with a bagful of loot while firing a pistol. Sharp as a tack he realises there is a robbery in progress and gives chase in his cab while informing the rozzers over the radio. The chase scene through central London is hardly up to Steve McQueen standards, but it takes in several tourist attractions before the gangster lady chucks a few tacks in the road and causes Fred’s cab to veer rather unconvincingly out of control and hit a park bench – there being no big pile of cardboard boxes in the vicinity.

You’d think he’d be hailed a hero, but our Fred is called into the manager’s office and shown a poison pen note sent in anonymously. Basically it says, “Did you know you have an old lag working for you?” Luckily the manager does know about Fred’s shady past and is prepared to overlook it, him being one of their best drivers and even prepared to go south of the river. When they go to the police with the note, the cops twig the reason behind it. They figure that the gang who have been doing all the robberies (there’s only ever one operating in London at any given time) want to recruit Fred as their resident safecracker and figure he will play ball if he gets all bitter and twisted from being sacked. Fred agrees to play along, with only the cops, his boss and his sexy girlfriend being in on the truth. It’s a very dangerous game Fred’s playing, like driving with worn disc brakes or not looking in your rear view mirror while reversing.

As for the gang of thieves, well Sam Kydd’s one of them of course. He was in every British film made around this time and plays one of the senior members of the gang, who are led by a master brain known only as “The Governor”. Don’t call him Guv or he will get very cross. The gang’s latest epic crime involves putting a plank between two buildings, crawling across it and blowing a safe full of untold riches, or about fifty grand in old money. The night watchman has been given drugged coffee and he’s out like a light. Of course Fred has tried to tip the cops off in advance as to the location, but the gang don’t trust him and so the game gets even more dangerous… like forgetting to indicate when leaving a roundabout.

It all gets pretty tense at the end when Fred sets off the alarm and blows his own cover. The crooks take him back to their hideout in an ice-cream factory and it looks like curtains for our easy-going hero as he is locked in a freezer to die. Will the cops get there in time to give him a fag to warm him up?

I was on the edge of my bed. But in the end it’s the good old London cabbies who save the day, storming the place and dumping bloody great bags of sugar on The Governor from a great height because he just wasn’t sweet enough already.

While neither movie is any great shakes, they both move at a fair old clip and feature interesting views of old London town. The prints used are also well above average, especially the transfer for The Radio Cab Murders (a film that only features one murder by my counting). You can’t see these kind of movies anywhere nowadays so companies like Renown are fulfilling a valuable service for film buffs with a nostalgic bent. Evening all!