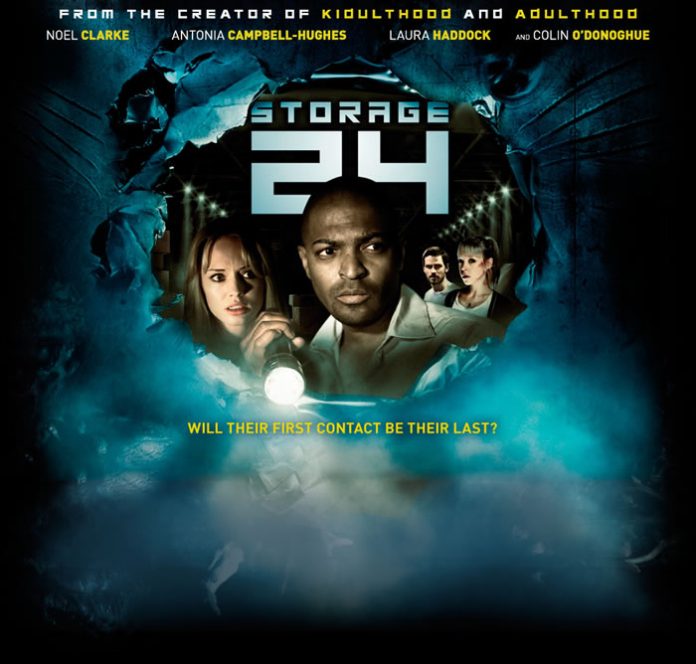 Since the success of last year’s Attack the Block we’ve now got a flurry of British monster movies coming our way. First out of the gates is Storage 24 from Noel Clarke – something of a one man film industry – and essentially his reworking of Alien. Except here no one can hear you scream in a industrial estate storage facility.

After a military plane crashes in London Noel Clarke’s Charlie finds himself and his best friend trapped in a self store warehouse with his ex girlfriend. The crash has short circuited the electrics and locked them inside. How do they get out of the facility that’s built to keep things in when there’s also a predator trapped inside too – and out to hunt them down.

P>It all starts well enough and even has the courage to start bumping off animals too, but as with all films like this there are only ever two questions: In what order do the cast get bumped off ? and How do they kill the monster?

The problem is that after Scream so candidly explained the rules of how to survive it’s difficult to try and subvert them. A little effort is made here but we still get characters going off on their own into shadowy corners and shouting out, ‘Hello! Is someone there?’ Oh, and of course there’s the obligatory, gibbering, soon to be victim who utters the legend, ‘We’re all going to die!’

That said there is a convincing depiction of 20-somethings breaking up, with Clarke showing what a good actor he can be with the right material as he pleads with his ex to rescue their relationship.

After the low budget F, director Johannes Roberts has got a bigger budget to play with and he does orchestrate some effective shocks as well as efficiently conveying a sense of doom each time a character goes off on their own. Ultimately, however, these scenes just peter out and become repetitious, and he does seem to rely a little too much on huge close-ups.

Despite these misgivings there are enough eviscerated carcasses to keep gore hounds content, and the last shot rounds things off nicely, if not a little too obviously, for a potential sequel.