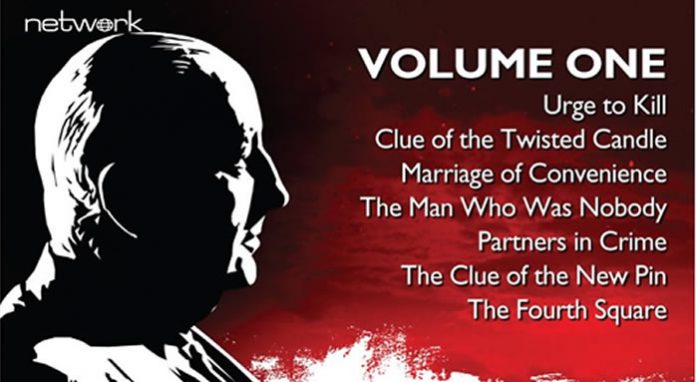 I recently got my hands on the first two volumes of Network’s Edgar Wallace Mysteries, and was going to review them in the next issue of The Dark Side. Unfortunately there are so many other new releases coming up that we seem to have run out of room to do them justice, so I thought I may as well discuss them here in my Blog instead.

It was certainly a trip down Memory Lane to see that revolving bust of good old Edgar again, accompanied by Michael Carr’s famed ‘Man of Mystery’ theme that was a chart hit for The Shadows back in the 60s. These Edgar Wallace programmers clocking in at around an hour each used to turn up regularly on ITV in late night slots when I was a kid, and there seemed to be an endless number of them. A bit of research now shows there were ‘only’ 47 and they were made between 1959 and 1965. Though I saw them on telly they were originally shown in UK cinemas as second features, and most were made at the tiny Merton Park Studios under the watchful eyes of producer Jack Greenwood.

One or two of the movies were also shot at Beaconsfield by Independent Artists, the production company owned by Julian Wintle and Leslie Parkyn that made Night of the Eagle. Other films also got added to the TV sales packages, and films like The White Trap and Urge To Kill, though not strictly part of the series, are included here anyway, sometimes as extras. All of the shows are in black and white and fairly talky. A lot of them seem to open with a burglar cracking a safe, some have complex ‘locked room’ plots, and in at least one of the tales the butler did indeed do it!

Volume 1 has eight movies in total. One of the better entries is Urge To Kill, which is not a Wallace story but was included in syndication packages nevertheless. This one’s set in a tiny boarding house run by a cheery ‘Auntie’ type who has a retarded son. Smoothy lodger Howard Pays is actually a homicidal maniac who would rather strangle women than make love to them and he sees an opportunity to pin his crimes on the backward lad. Quite an intriguing and entertaining tale, with elements of The Lodger, and it’s weird to hear Wilfred Brambell (Steptoe) talking posh!

The Clue of the Twisted Candle is classic Wallace, a twisty yarn of a dodgy, thick-bearded and Jewish dealer played by Francis De Wolff who frames his business partner David Knight into jail. Knight gets free just as De Wolff is found murdered in his burglarproof room, and as an added mystery it seems that the victim telephoned Scotland Yard AFTER his death! The solution is suitably ingenious, though we’d have liked to see the murderer get away with it because he seems a thoroughly decent chap for most of the show!

Marriage of Convenience has John Cairney (The Flesh and the Fiends) absconding from prison on the eve of his wedding, locking the inept cops who are supposed to be guarding him inside the Registry Office and zooming off on a stolen scooter. It seems the real love of his life has stitched him up and absconded to the coast with the proceeds of a bullion robbery, in company with a bent copper (John Van Eyssen) just to rub salt in the wounds. Can Cairney get his money before Scotland Yard’s finest catch up with him? Clive Donner (Here We Go Round The Mulberry Bush) directed this fast-moving tale, which stars Harry H. Corbett as Inspector Jock Bruce. I’m not sure this is supposed to be a comedy but Corbett plays his character with the same comical air of bemusement as he did Inspector Bung in Carry On Screaming. There’s even a Frenchman in this who is known as ‘Onion Johnny’ and has onions strewn all round the handlebars of his bike. No stereotyping there, then.

The Man Who Was Nobody stars Hazel Court as a most unlikely female private investigator hired to find out why a guy buys an eight grand ring for his fiancée and then disappears, later to be washed up on the banks of the Thames. Obviously untrustworthy Paul Eddington (Yes, Minister) may have the answer, and the mysterious South Africa Smith (John Crawford) is around to both help and hinder Hazel’s investigations. Jack Watson’s stolid Scotland Yard man lets the others do all the hard work and steps in at the end with the handcuffs.

At the start of Partners in Crime, a middle-aged businessman returns home after a night out with his foxy wife (Moira Redmond) and the obviously crooked John Van Eyssen, his partner in a firm called ‘Cool Kups.’ He enters his lounge and catches a burglar in the act. Two seconds later he catches a bullet. Inspector Mann of The Yard (reliable Bernard Lee of the Bond films) is soon on the case and scratching his head as usual. Meanwhile Van Eyssen – for it is he behind the dastardly deed – pays off the killer, a lorry driver, and advises him to dump the murder weapon pronto. But when the driver stops at a roadside cafe the gun is pinched from his cab by a pair of motorbike kids, thus beginning a chain of events that will culminate in a shootout in a junkyard. More action than usual in this one, and Van Eyssen meets a pretty grisly fate rather than just being led off to the Big House.

The Clue of the New Pin is another nifty locked room puzzler, with Paul Daneman as the chief suspect in the murder of his miserly millionaire uncle, found shot dead in a sealed room locked from the inside with the only key. Scotland Yard is represented by Bernard Archard, who is obviously a bit more intelligent than your average plod because he doesn’t smoke like a chimney. An annoying James Villiers (of Blood From The Mummy’s Tomb) has a major role as a good-looking TV personality pal of Daneman’s whose efforts at playing amateur detective land him in trouble. The solution is simple yet ingenious, and this is definitely one of the better episodes.

Finally comes The Fourth Square, an episode that opens with a safe being cracked. The thief has his own calling card, leaving four square-shapes on the wall by the safe for Lily Law to puzzle over. In this case it’s Basil Dignam stroking his chin and wondering why the robber appears to have left empty handed. Meanwhile Private Investigator Conrad Phillips (William Tell) gets a visit from the female victim of the crime (Delphi Lawrence) because she wants him to track down a stolen emerald that was a gift from her lover. The thief who left the trademark squares actually died in Newport Pagnell, so no change there, but our hero gets to visit some tacky night clubs and chat up lots of showgirl-types so he’s happy to carry on looking. The villain when he’s eventually uncovered turns out to be one of the minor characters, introduced near to the rather abrupt ending. A bit dull, but Hazel looks great.

Another extra on the disc is October Moth, a rather slow-moving affair which doesn’t have the feel of an Edgar Wallace tale at all. Lee Patterson is a mentally retarded guy who accidentally causes a car accident and brings the female victim – whom he is convinced is his late mother – home to the farm he shares with his sister Lana Morris. The worried Morris enlists the help of Peter Dyneley, a telephone repairman, to try to convince her brother he’s deluded, but Patterson then thinks that Dyneley is his late father, a brutal tyrant, who deserves to be six foot under, so you know it will all end in tears. This is a dragged-out and depressing tale despite decent performances.

Quality-wise I reckon the Clue episodes are most fun, closely followed by Partners In Crime and Marriage of Convenience. The only real dud is October Moth, but that too has its interesting points. All of the movies are interesting to watch if you’re a fan of 60s London, and they are a reminder of a time when people smoked incessantly and Scotland Yard inspectors didn’t mind having a scotch or two at about nine-thirty in the morning, even when they were on the job. I’ll cover Volume 2 in my next Blog. Now, to quote the late, great George Dixon, ‘Evening all.’