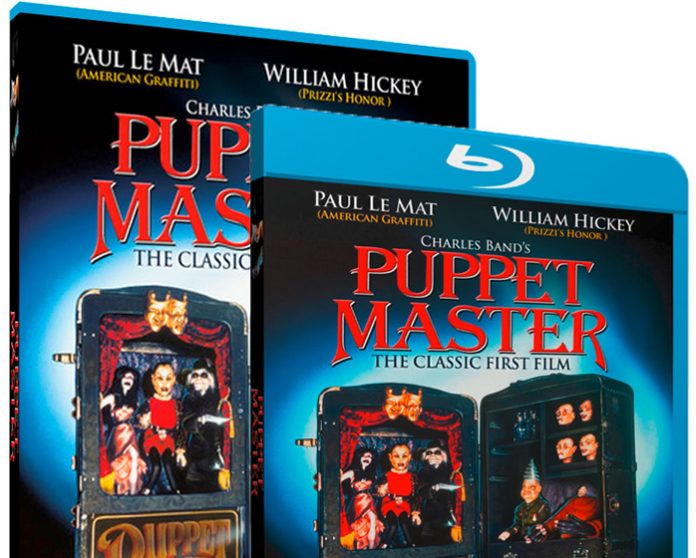 Blade, Jester, Tunneller, Pinhead, Leech Woman. Nothing to do with any wrestling foundation, but the Famous Five of 80s horror cinema, kicking off the homuncular japes and misdemeanours in 1989 that would keep many entertained through nine sequels, with a further due out later this year. Charles Band’s creations, skilfully realised by special effects designer David Allen, weren’t as grotesque as Dolly Dearest, never had the nasty streak of Chucky and were just better made than Demonic Toys (also a Band franchise). The puppets’ enduring appeal is predominantly down to the fact that they aren’t inherently evil, any misdeeds carried out through admirable loyalty to their master who usually ends up sidelining them. Perhaps the Puppet Master films can be seen as anti-bullying parables with violent accompaniment to the ‘Pick on someone your own size’ rebuff fired back at any persecutors.

The first of the series begins in 1939 as the eponymous craftsman, Andre Toulon, secretes his wooden children in a wall panel of the Bodega Bay Inn when a couple of Nazis come to pay him a lethal visit. Jumping forward fifty years later, a group of psychics meet at the same hotel after receiving worrying visions sent by a former colleague, Neil Gallagher: he had always promised to contact them when he found the hiding place of Toulon’s marionettes so that they could all study the ancient Egyptian magic that invigorates the inanimate. Upon arrival, the mystic mates discover that Neil has blown his brains out, and his last wish was that he would wait for them before being lain to rest. But this may not be the gesture of solidarity it would seem: puppets don’t just scuttle around causing homicidal mischief on their own- they need a guiding hand.

Upon watching the film again, what is most impressive is the balance between solid horror and slapstick comedy. The puppets clamber up a chair and jostle each other to spy on a couple bonking in the bath prior to Tunneller getting his own end away in the woman’s forehead. The cooing pleasure of her trussed and blindfolded partner become howls of pain as he realises that the sucking on his nipple was not his other half but Leech Woman retching phallic black slugs on his chest, each giving hickeys that will never be explained away. Most entertaining of all is the puppet POV camera, scurrying around at shin height, scaring dogs, running along piano keys before being knocked over by a closing door, the latter even warranting some cartoonish bird tweets on the soundtrack.

Shot by Fulci’s regular DP Sergio Salvati, not only is the Steadicam work technically superb, but the rich lighting associated with Italian horror makes many scenes glisten, notably when the victims of rogue puppetry have been placed for show in the dining room, candles ritualistically burning around them, flames diffusing as if in the haze of a bad dream. But ultimately, it is the personality of Toulon’s miniature troupe that has guaranteed Puppet Master a lengthy life and venerable reputation. Be it Blade’s cheeky rictus, Pinhead’s lumbering resilience or Jester’s mocking emoticons, long may they continue wreaking pint-sized havoc.

Extras: ‘No Strings Attached’, archive making of focusing on the FX; Introduction by Charles Band; Anecdotal commentary with Band moderated by film writer Chris Gore; UK exclusive commentary by Calum Waddell and critic Justin Kerswell who have an entertaining rapport and extensive knowledge of the film but aren’t afraid to branch off to place 80s horror cinema in a broader context; Trailer. With the high-def transfer looking pristine for a movie that was originally released direct-to-video, this is the first significant package from 88 Films. Let’s petition them to release a Puppet Master boxed set.