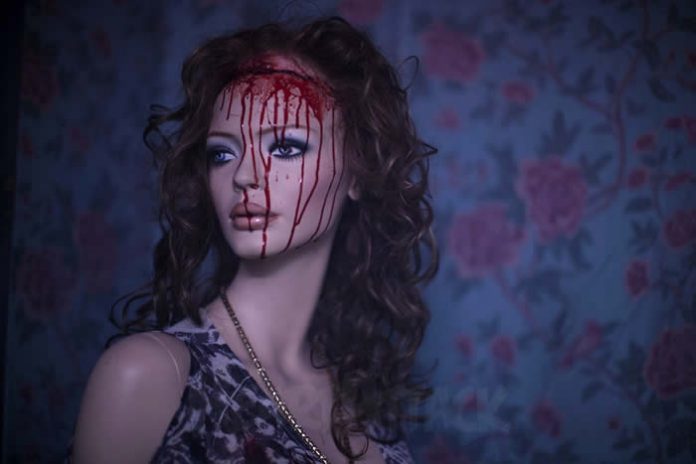 Dark Side issue 149 hits the newsstands on Thursday 30th August, but if you were at FrightFest this past bank holiday weekend you could have picked up an advance copy there from our friends at The Cinema Store. This issue has Leatherface on the cover and boasts an indie movie theme, with pieces on upcoming horrors like Tower Block, Rites of Spring and Paura 3D. It will be interesting to see if this does as well as our recent Hammer issue, which was such an amazing success that we are already pressing ahead with an Amicus special for our Halloween issue 150.

Things have been very busy for me, so I only managed to get in a single FrightFest visit this year. Yannie, myself, my daughter Amber and two of her friends (boyfriend Sam and galpal Cassie) booked in to watch Tulpa and Maniac on Saturday night, and share a brief chinwag with the likes of Jake West and Marc Morris and their lovely respective ladies, Lucy Clements and Michelle Chong, plus the ever-reliable BBFC Dave (who walked out of Tulpa after 30 minutes – wise fellow).

Tulpa (2012) turned out to be a woeful attempt to revive the Italian giallo movie that actually had the audience in stitches with its stilted dialogue and wooden acting. The plot makes no sense at all but is centred around a pretty blonde businesswoman who visits a kinky sex club to let off steam after her Alan Sugar-like boss warns her that she might be the next apprentice on Jobseekers Allowance. Run by a weird skinny guy in white gloves and his very butch lady friend, the club encourages its members to “release their Tulpa”. Personally we reckon she should have kept her Tulpa where it was, but what do we know?

Anyway, gruesome murders occur and the victims are those whom our heroine shares kinky sex with, plus anyone who seems to have it in for her at work. The gore scenes are pretty good, the music is effectively old-style, swamping the movie, and the resolution is suitably daft. However, the script, acting and dialogue are so mind-numbingly awful that it’s impossible to take seriously. Director Federico Zampaglione was in attendance and seemed a nice chap, but the majority of the audience headed for the exit rather than stay for his post-screening Q&A.

A bit better, but frankly not much, was Maniac, director Franck Khalfoun’s unnecessary remake of Bill Lustig’s notorious 1980s exploitation classic. Lustig’s film had ultra-gory Tom Savini effects showing the hair-fetishist psycho scalping his victims, and the BBFC were not enthusiastic, trimming most of them. Goodness knows what they will make of the splatter scenes here, because they are even more grim and gruesome. But the movie as a whole is as strangely disconnected from reality as the killer himself, thanks to the director’s odd decision to shoot it entirely from the killer’s point of view, in essence making leering, bloodthirsty Maniacs of us all.

Peeping Tom got banned for portraying a psycho in a sympathetic light but times have changed, obviously, and now it’s okay for us to vicariously stalk and slash helpless young women. I’m not so sure I agree with that.

Here Hobbitt-gone-bad Elijah Wood is the main man, fresh-faced and undernourished as opposed to Joe Spinell’s craggy-faced and bear-like original. “Hair is the only part of the body that lives forever” says our disturbed hero, and his slice and dice antics are designed to decorate the bare bonces of the mannequins in his apartment because, well, he misses his mum, who had a lovely perm in her day. Bless.

Nora Arnezeder is French photographer Anna, not as memorable or as sexy as Caroline Munro, and though her relationship with Wood is more believable than that of Joe and Caroline, their scenes together tend to be fairly dull. Like the original, the new Maniac will ultimately gain an audience because of its extreme, unrelenting gore, but unlike the original this is underwritten, dragged out, and actually quite irritating to watch. Give me 80s sleaze and Tom Savini getting his head blown off any day.

Back out in the foyer afterwards I had some brief words with the fabulous Alan Jones, who berated me for delivering advance copies of The Dark Side to the Prince Charles cinema – which they stopped using as a venue many years ago! FrightFest’s party animal Paul McEvoy also had a laugh at my expense over that one. Call it a senior moment, eh?

Harvey Fenton of FAB Press gave me a hardback of Alan’s revised Argento book and boy is it an amazing piece of work. There’s nobody in the world that knows more about Dario Argento than Alan Jones – not even Dario himself – and this has to be the definitive tome on the subject. The fact that it looks so gorgeous is just an added bonus. Harvey must spend a fortune on producing these things and all I can say is it’s worth every penny of its £40 cover price. Check out Harvey’s ad in the new issue.

Another book I’ve been enjoying recently is X-Cert, a nostalgic look at independent British horrors from 1951 to 1970, written by former DS contributor John Hamilton, a really nice guy with a very friendly writing style whose FAB Press Tigon book has pride of place in my home library. Published by Hemlock Books at £17.95 (www.hemlockbooks.co.uk) X-Cert ignores the Hammer, Amicus and Tigon movies made during this period and concentrates on the smaller studios that maybe only produced a few movies in the genre before going the way of all flesh. We’re talking about companies such as Planet Productions, for whom Terence Fisher made The Earth Dies Screaming, Island of Terror and Night of the Big Heat. I love John’s comment on Island of Terror: “Niall McGinnis, who was such a memorable villain in Night of the Demon, is reduced to modelling a nice line in chunky knitwear and peering through his binoculars.” I love Island of Terror, but I can still never figure out how that clumsy ‘giant turtle’ silicate craftily got up a tree so it could drop on some poor schmuck’s head!

Just as interesting are John’s comments on more obscure Brit horrors like Naked Evil and The Hand of Night. I remember the latter vividly but have never read much about it before. Glad to see the Herbert J. Leder double of It! and The Frozen Dead coming under the microscope too. John recounts an amusing tale of star Roddy McDowall visiting his female lead Jill Haworth in her Broadway dressing room (were she was playing Sally Bowles in Cabaret) and handing her an autographed poster of It! He had also signed ‘Sh before the title. I like the movie, actually, because McDowell is just great channelling Norman Bates and Jill looks gorgeous – so sad she’s no longer with us. Seeing The Golem tear down Hammersmith Bridge is worth the price of admission alone, especially since I’ve spent so many hours in traffic jams on the bloody thing!

In many ways X-Cert can also be seen as a tribute to producer Richard Gordon, a lifelong genre fan who made many pictures in the UK ranging from Old Mother Riley Meets The Vampire to Fiend Without A Face and Corridors of Blood. He even had a hand in Island of Terror and Lindsay Shonteff’s The Devil Doll. The book is dedicated to Richard (who died at 85 in November 2011) and has a last chapter remembering his legacy, a very nice touch. It’s a shame that cutting off the timeline at 1970 precludes Tower of Evil and Horror Hospital, two of my favourite latter-day Gordon-produced guilty pleasures, but if you are in any way interested in British horror movie history then X-Cert is a must. That’s it for now, but I’d like to leave you with two valuable bits of advice: don’t miss the new Dark Side, and never moon a werewolf.