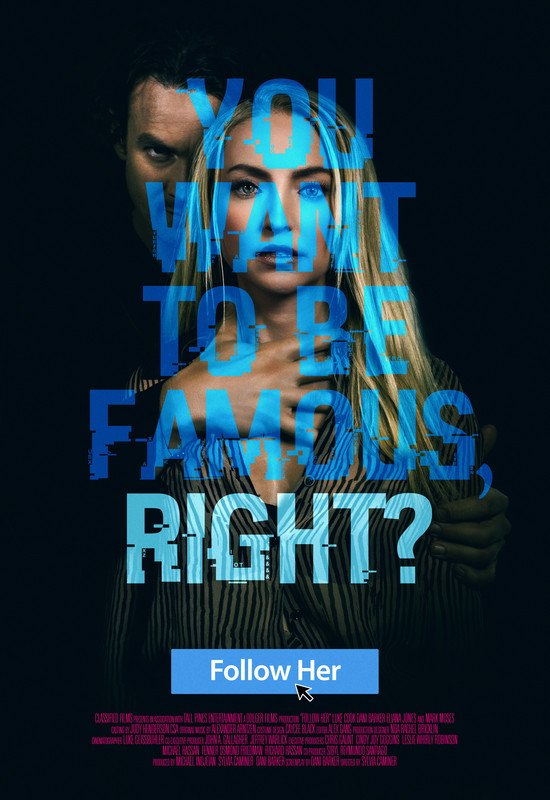 Dark Side Magazine at FrightFest 2022 – James Whittington interviews Dani Barker, writer and star of Follow Her

A cool yet dark and sinister movie showing at FrightFest 2022 is Follow Her, a look into the dark side of the web. We had the chance to chat with its writer and star Dani Barker about this chilling movie.

DS: Did you know from a young age that you wanted to work in the film industry and was there one person who inspired you?

DB: Good question! I started in the theatre and definitely didn’t have plans to work in the film industry as I had no exposure to it in my small town. But I was drawn to newspaper ads stating: “Casting Calls for Actresses” in the BIG CITY. I know now those were probably scam ads. In terms of inspiration: I was inspired by a guy who I worked with at Safeway (my 2nd job ever), he was a janitor, who said he was friends with Sharon Stone and would introduce me. Again, not real.

DS: Where did the idea for Follow Her come from and how did director Sylvia Caminer come on board?

DB: The idea came from a real job, working for a guy I met on Craigslist who hired me to write him scripts so he could act in them, as the villain. I came up with the freaky premise for Follow Her during that time and thought oh no way am I giving this idea away to the guy on Craigslist who is paying me $100 bucks. After listening to a podcast one year later: advice to first time feature filmmakers was – go make another feature first and make all your mistakes on that one before you make your “baby project”. I did just that, and in the process fell in love with Follow Her, so much so that I forgot about the initial project entirely. Just now, I am working to get that original project financed.  I met Sylvia Caminer through our amazing EP who unfortunately passed away during Covid – John A. Gallagher. He was the first champion of this project.

DS: Did you write it with a cast in mind?

DB: Yes and no. Not at first. But as the character developed, it certainly had influences of people I met either through craigslist ads or in real life. I was inspired by actors for the character of Tom Brady – Shia LaBeouf, Dacre Montgomery. There’s a freedom and spontaneity in their performances I was seeking, and we definitely found that in Luke Cook.

DS: Your character, Jess, is very much a lost soul just wanting acceptance and love, would you say that was a case for a lot of “influencers” out there?

DB: I think this is the case for a lot of actors in general. Which is why there’s so many acting studios out there exposing actors’ traumas. I have a whole separate film about that.

DS: How did you prepare yourself to play such a demanding role as Jess really does go through a lot of different emotions and situations?

DB: I cut myself off from the world for 30 days to prep, sent texts to everyone I knew that I was unreachable until after shooting, “I was going off the grid.” I stepped down as a producer on the film during this time so that my prep wasn’t thwarted with producing tasks, which I had been warned can happen. Because I wrote the script, the memorization aspect of it wasn’t hard. Just a matter of going line by line which I typically worked on in the gym on the elliptical to keep myself entertained. I also hired a personal trailer because the last thing I wanted was to feel insecure about my body in any way while on screen. This made a massive difference! Proud of myself for this prep.

DS: You and Luke Cook who plays Tom, have a superb and natural electricity on camera, did you rehearse much?

DB: First off, thank you! We actually only rehearsed for one day, but we cast him because we could sense the chemistry from our first meet. Not only did Luke audition, but we met up in New York to talk about the script. It was clear he was the guy. No question.

DS: What was the hardest scene for you to do?

DB: The most challenging day (sorry 2 days) was the FIRST and LAST day of shooting. Weather wasn’t cooperating so we opened the first day of shooting with the sex scene. Great. I was terrified. Luckily, we didn’t get through all my coverage and picked it up the next morning so I felt more relaxed by then. The last day of shooting, we switched to night shoots, and I think everyone was exhausted by this point. It was tiring and difficult to understand what WAS and WASN’T working. We were so rushed for time… and burnt out.

DS: The movie has a very serious tone, what was the atmosphere like on set?

DB: The atmosphere was mostly light but partially serious. Luke Cook fortunately cracks a lot of jokes which gets everyone laughing. Our freakin’ awesome DP Luke Geissbuhler has fun with his crew. I found Sylvia to be relaxed yet focused.

DS: This is a gripping, psychological thriller and is getting some rave reviews, has this put pressure on you for your next project?

DB: Not from anyone else but myself. Mostly because I CAN’T WAIT to get the next project going. Can. Not. Wait. I have two very cool feature scripts that are ready to go!

DS: Do you get nervous watching yourself on screen and what does it feel like seeing your words come to life?

DB: It’s always challenging watching myself in front of big audiences, but only for the first 10 minutes. Then I stop nit-picking and enjoy the film.

DS: Will you watch with the FrightFest audience?

DB: I’ll try! But you can only watch our own movie so many times… unless everyone in the audience is going nuts, in which case I’ll stay. 😉

DB: Working on the sequel script, a musical version of Follow Her that was pitched to us and raising finances on a sex comedy feature which I wrote before Follow Her.