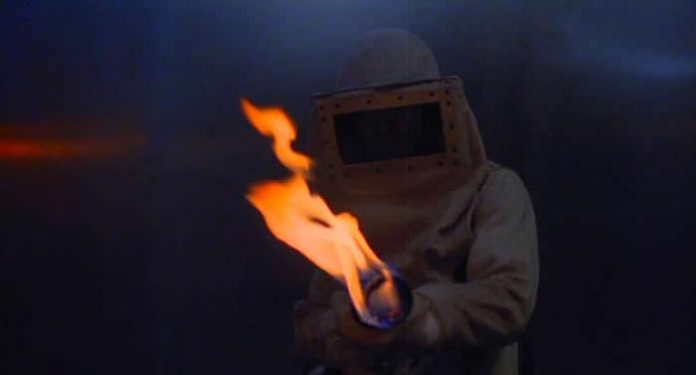 Donald Kohler is a lonely pyromaniac who’s still looking for the perfect match. The kind of girl that lights up the room. But there has always been one thing in his way- his overbearing mother. Upon returning home one day, Donny finds the old bag dead and immediately hears voices in his head telling him he’s free. To celebrate this liberation he plays loud music, jumps on the furniture, stubs cigarettes out on the mantelpiece, and leaves to buy something to impress the ladies alongside the necessary protection. Picking someone up that very night he grabs the opportunity to use his recent purchases to bestow a warm jet of love: stripping and chaining her up in a stainless steel room, he flops open his flamethrower and lets rip.

As the community is full of the most naïve girls in the Northern hemisphere who unquestioningly accept the invitation to go back to a complete stranger’s house to meet their mother, Donny soon amasses quite a collection of charred chicks with the faces of swollen beetroot. But things begin to unravel as our troubled hero becomes plagued by the disapproving voice of his mum rotting in the other room and the imagined laughter of the smouldering harem at such a feckless mummy’s boy. He is a man about to reach melting point.

Don’t Go In The House is a luridly photographed, and typically rather tame, video nasty that has stood the test of time, predominantly through its sympathetic character study of its main psychopyropath. Brought up in a strictly Catholic household, Donny’s mania is fuelled by an incident of child abuse: his mother held her son’s arm over the gas hob for being non-specifically “evil”. Is his desire to incinerate members of the opposite sex related to the deed he was disciplined for or is it in itself a transferable form of punishment against the domineering matriarch? When Donny visits his local church during the depth of madness, fascinated and calmed by the burning votives, he confesses his childhood trauma to the priest, who remarks that he must forgive those who have trespassed: later that night he breaks down in frustration, wholly unable to absolve his mother, which will eventually manifest itself as gasoline-fuelled fury at the Father who couldn’t help him.

Played with maladroit sincerity by Dan Grimaldi, who would go on to appear as the Parisi twins in The Sopranos, the adult Donny is prone to teenage tantrums, foetally lying on the bed listening to music after his fried fillies supposedly mock him, and adolescent confusion: when out looking for a disco outfit, he becomes timidly receptive to the approving compliments of the camp shop assistant; his gradual gravitation toward the acceptance of going for a beer with a work colleague might pass for bromance (although heaven forbid if Judd Apatow ever optioned the rights).

Surprisingly full of poignancy and featuring a coda that defiantly refuses closure, Don’t Go In The House is worth rediscovering as one hot property…