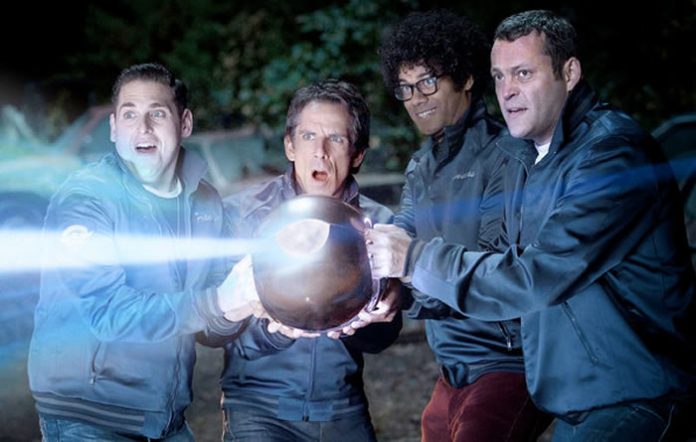 When a Hispanic member of a Florida neighbourhood watch shoots dead a young black male, all hell breaks loose because he is accused of it being a racially motivated killing. That true-life event, however, is not the plot of this ensemble comedy thriller/monster movie mash up but rather the reason why its release was delayed in the States.

Here Ben Stiller, a proud community-centred resident, forms a neighbourhood watch after a security guard at his COSTCO warehouse comes to a grisly end and he sets out to find the killer. As only three others ( Jonah Hill, Vince Vaughan and The IT Crowd’s Richard Ayoade) turn up for the inaugural meeting, the Watch team is small, and they find their endeavours treated with contempt and derision by the local police sheriff. Against a background of personal stories – Stiller and his wife trying to conceive a child, Hill’s psychotic mother’s boy, Vaughan’s over-protective father, and Ayoade’s slightly dim Brit – they uncover an alien in their midst.

As Ben Stiller films go, this is an average project which, whilst very funny in places, veers in tone. Comedy thrillers are notoriously difficult to pull off, and this flits between a who(or what)dunnit? to teen gross-out comedy to monster movie to action film, nearly all of them played for laughs and none ever really convincing. With all the onscreen male bonding the film really appeals to ‘the lads’, even catering for them with its adolescent fixation with male genitals, whether it be Stillers infertility, Hill’s gun obsession, Ayoade’s sexual fantasies or Vaughan’s concern with the size of condom that his daughter’s boyfriend buys. There’s also an orgy scene and suspicions about a neighbour’s sexuality. Although it starts off as a comedy, by the end it’s a full-on gun-blazing monster movie complete with a really heart wrenching scene. In fact a very bloody heart wrenching scene.

There are no characters here that we’ve not seen the stars play before. Vince Vaughan does his usual schtick in these type of comedies and Jonah Hill is somewhat wasted after his recent success in 21 Jump Street and MoneyBall – (although the least said about The Sitter the better). The standout performance is Richard Ayoade in his first US film. But frankly all are capable of better but it’s mostly an innocuous comedy, save for the shock of the ‘C’ word putting in a wholly unnecessary appearance.