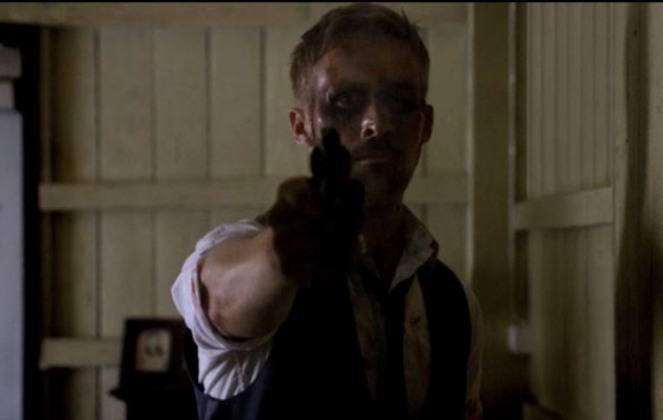 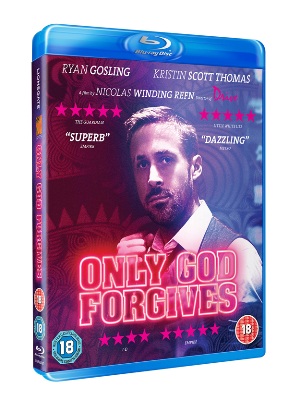 Official Synopsis
Reuniting Winding Refn and Ryan Gosling for the first time since the phenomenal success of Drive, Only God Forgives is an awe-inspiring journey through Bangkok’s criminal underworld.  Julian (Gosling) runs a boxing club in Bangkok as a front for a drugs operation. He has everything he desires until his brother is murdered, and his mother (played by the outstanding Kristin Scott Thomas), the head of a powerful criminal organisation, arrives to collect her son’s body. Furious with grief, she dispatches Julian to find his killers and ‘raise hell’. The stage is set for a bloody journey of betrayal and vengeance towards a final confrontation and the possibility of redemption. Hailed as mesmeric, mad, brutal and brilliant, Only God Forgives is a neon-drenched fairytale you’ll never forget. 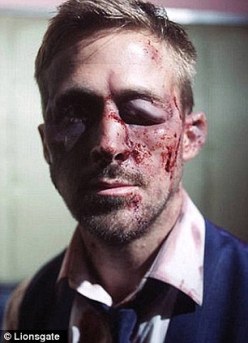 While some thrillers warrant review within a horror magazine for the level of gore effects used – Saving Private Ryan was notoriously promoted to a younger audience via close-up shots of the opening sequence’s carnage in Fangoria – others earn their place through mood and atmosphere, sometimes in addition to gore. David Lynch was the master of this, as was John Carpenter and David Cronenberg still is; to that illustrious list needs to be added Dane Nicholas Winding Refn. Not one of his thrillers shys away from showing the full graphic effects of violence committed by humans upon each other, but this is the first time he has been able to bring the vision behind Danish TV series The Chosen 7 and financial failure Fear X to a wider audience, courtesy of the success the other year of novel adaptation Drive.

Only God Forgives on paper superficially resembles the low-budget martial arts films of the 80s and 90s where white leads compete in Asian underground fight competitions, driven to win by revenge as often as honour. In reality, it is more a Conradian nightmare journey, where the vile actions of one white man in Thailand lead to his death, setting tumbling dominoes that will include his brother trying to maintain some degree of honour, his mother seeking vengeance, and a lethal, local cop who rules the streets with an executioner’s blade.

Visually resembling Wong Kar Wai’s films, the film carries nods to genre films of East and West, Davids Lynch and Cronenberg, something of Kubrick’s visual skill as brought to the project by cinematographer Larry Smith (Bronson), and even a couple of shots which, when combined with the score, resemble classic anime cityscapes. Refn has been variously quoted as wanting to make a Western in Asia, wanting to follow up Drive with another thriller that was an acid trip to the earlier’s cocaine rush, and looking to make something that bears the influence of his new friend and mentor Alejandro Jodorowsky, who has now anointed him his heir apparent. The film measures up on all fronts; it is by turns sensual, brutal, exciting, horrific, sexy and, very occasionally, funny. Truly, his ambitions were realised. 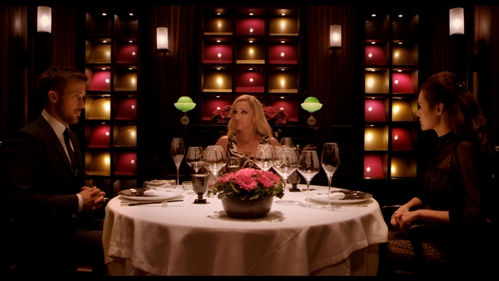 The film’s divisive nature with Western critics and failure to re-capture the Drive audience has as much to do with this creative accomplishment as it does with Refn’s determination to buck the expectations that film’s success and its audience have placed on him. Not only does the film posit Gosling as an animalistic drug dealer with severe Mommy issues (Archer fans will see a resemblance here and there), but as the film progresses the Western audience is further alienated by the realisation that every white face in the film is a criminal, and usually a nasty one at that.  The meek “princess to be saved” of Drive (a criminal waste of Carey Mulligan, the new Samantha Morton) is here replaced by local prostitute Mai (former Thai pop singer Yayaying Rhatha Phongam), and mob mother Crystal (the great Kristin Scott Thomas, here on sexy, monstrous form), a problematic combo at best for that audience by comparison.

As the film moves on, it becomes clear that the moral centre of the drama is brutal local cop Chang (Vithaya Pansringarm), his very specific localised morality (described as Old Testament in the commentary, which fits with the Western but in local context resonates differently) seen as the only one that keeps order and provides a measure of justice, and suddenly an audience there to see heart-throb Gosling righteously kick criminal ass is utterly adrift. This is only fair and right after so many years of Western leads in Asian-set films imposing their values on the world around them; here, their inherent corruption sullies a local society that has already adapted to their needs as much as possible, and only their complete, violent and bloody elimination can restore some order locally. 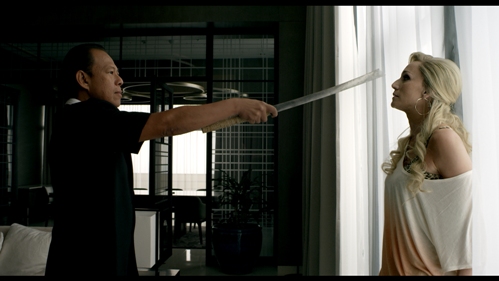 Video & Audio
One of the best-looking, best-sounding discs you’ll experience this year. Complete justice is done to the sumptuous vision conceived of by Refn, Larry Smith, costumer Wasitchaya ‘Nampeung’ Mochanakul (Tears of the Black Tiger) and production designer Beth Mickle; the same for the superb soundtrack by Cliff Martinez and sound designers Kristian Eidnes Andersen and Eddie Simonsen.

Skin tones remain skin-like within the most garish of lighting set-ups, while colours and shadows are full and deep, precisely accurate to location, time of day, and sometimes very specific light sources. Audio effects are likewise precise and rich, with Martinez’ score becoming a key aspect of how the story is told, punctuated effectively by Thai pop songs sung by characters in karaoke bars. 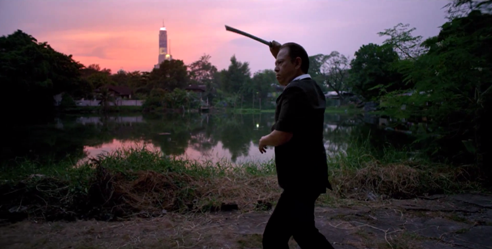 Extras
The U.K. disc has a commentary hosted by Empire/Guardian journo Damon Wise, which is the highlight of the extras. Refn is detailed and clear about every aspect of the film, from conception to release, and covers just about everything relevant.  He explicitly draws character parallels with Valhalla Rising and Drive, including describing Chang, the Angel of Vengeance, in the same terms as the Driver, i.e. the hero of the piece. It is complemented nicely by the press-release-touted behind-the-scenes clips, which only total about twenty minutes but give a real flavour of being in prep and on location during the production

The two trailers are included, with the rest of the extras consisting of image galleries looking at various posters developed for the film, including Little White Lies’ competition entries. These latter galleries are U.K. exclusives; the U.S. Anchor Bay disc gets 12 minutes of interviews with Refn and 9 minutes with Martinez instead. 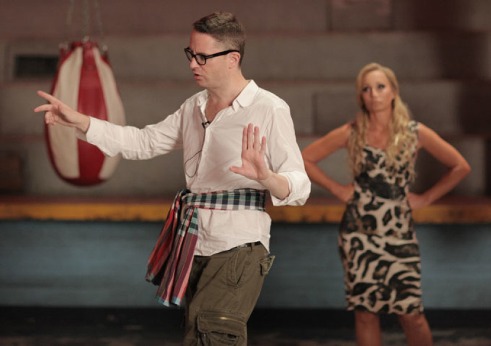 It has been said many times before that commentaries and BTS docs would become the new film school; listening to Refn and seeing him in action makes it clear that while they may help with the technical and collaborative nature of film-making, that is still no substitute for possessing clear artistic vision. Making it for half the budget proposed to him, sticking to practical effects, working in a country foreign to him with a local crew, yet still producing something so uniquely recognisable as his: this is the real lesson to be taken away by budding film-makers, especially those inspired by wide-ranging influences as Refn is.

Conclusion
One of the films of 2013, it only cements the Refn/Gosling creative combo after two films, and should make cinephiles salivate as much as inspire cineastes. A dark, wild ride through the souls of men and women in the Thai underworld, it is, for all of its nods and references, an original piece that undermines both the clichés of the genres it operates within, and the expectations Western audiences had of this team after the over-rated Drive.