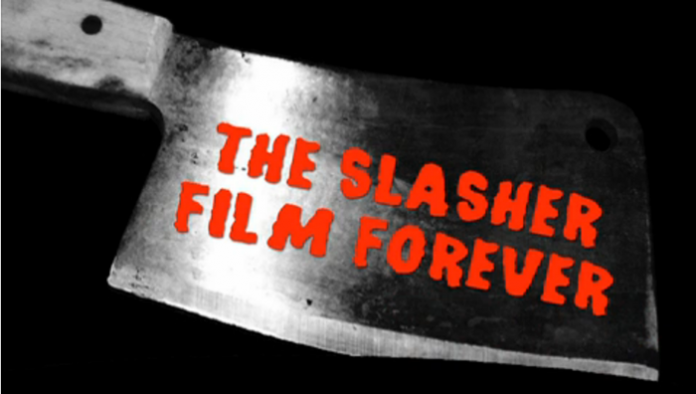 Dark Side readers will certainly be familiar with Calum Waddell, who is one of our most prolific contributors. When he’s not writing articles for us or numerous other film magazines, Calum is filming ‘extras’ for DVD companies for his company High Rising Productions, which he set up in 2009 with his attractive partner, Scottish designer Naomi Holwill.

Since that time, their small, Edinburgh-based company has worked on extensive supplementary material for such classics as Day of the Dead (1985), Deep Red (1975), Frankenhooker (1990), The Funhouse (1981), The House by the Cemetery (1981), Vamp (1986), Zombie Flesh-Eaters (1979) and many, many more. The company were largely responsible for the UK’s Arrow Video winning the Home Cinema Choice label of the year in 2010 and The Guardian newspaper’s label of the year in 2011.

The reason I mention this is that High Rising have now branched out to produce a great feature-length documentary entitled Slice and Dice: The Slasher Film Forever, which Calum gave me a preview of the other day. Now I know that this was made on a meagre budget and Calum and Naomi basically filmed it in their spare time while travelling round interviewing various horror personalities. Emily Booth was shot in the dance studio at my house on the same occasion when Calum and Naomi came down to film Caroline Munro for Arrow’s Slaughter High.

Much of the material was also apparently filmed at the 2010 Sitges Film Festival, where filmmakers as Alex Chandon (Inbred), Mick Garris and Christopher Smith (Triangle) came onboard. A final chance to crib some iconic names arrived during a trip back to the states in April 2011, allowing for Corey Feldman, Kenneth Hall (Puppet Master), Kevin Tenney (Night of the Demons) and several others to sit in the proverbial horror “hot seat”. Last minute filming in London and Edinburgh took place in late 2011 and mid-2012. The end result is a real labour of love that plays like a scream, er, dream.

Now I now I might be accused of bias here because Calum and Naomi are mates, but I’m not exaggerating when I say that this could be the definitive look at the stalk and slash genre. Apart from featuring lots of great gore footage, stills and posters, the talking heads on display largely have to do with the films themselves and are not just the usual ‘experts’ wheeled out of the BFI back room to supply some learned yet largely incomprehensible ‘Sight and Sound’-type bullshit.

Put together in a pacy fashion with lots of great soundbytes (Tobe Hooper says Texas Chainsaw is ‘about meat, and the chain of life’), the doc kicks off with Psycho, probably the first slasher movie proper, and also the first film to show a toilet! Then we go through Bava and Argento to the Halloween/Friday The 13th/Nighmare On Elm Street movies and various Video Nasties. Casting its net wide, the documentary takes us right up to the present day and also contains amusing comments from the participants about how best to survive in a slasher movie. Don’t have sex seems to be a regular mantra.

Also impressive is the punchy original soundtrack by Mars Homeworld – a talented musician based in Auburn, California. His atmospheric audio work has apparently also graced such feature films as Slime City Massacre (2010) and Countess Bathoria’s Graveyard Picture Show (2011). Not that we’ve seen them yet. He’s done a great job here though. The infectious theme from Slice and Dice: The Slasher Film Forever – “All Kinds of Twisted” – was composed by the Scottish punk band The Acid Fascists, according to Calum they are a local legend in their native Edinburgh. Mind you, so is he.

I know that you’re asking yourself where and when can I see this? Well I’ll have to let you know when Calum tells me. Meanwhile, the great news for he and Naomi is that the film has been chosen to play at Sitges this October in their prestigious Festival Internacional de Cinema Fantàstic de Catalunya. This is a rare honour indeed and symptomatic of the high quality of the finished product. Well done guys, even though you didn’t ask me to take part. Boo hoo!