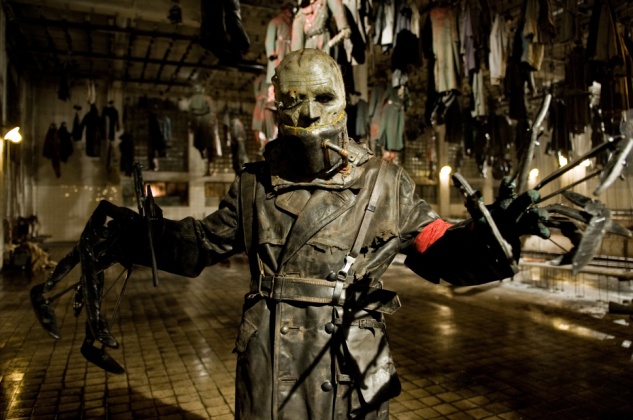 There are various ways by which one becomes a film director, with some of them more straightforward than others.  Some are better training for directing than others – actors, writers, producers, 2nd unit directors, all tend to become directors more often than cinematographers and stunt directors.  Unusually, Frankenstein’s Army comes from the mind of Dutch long-time storyboard/conceptual artist and titles designer Richard Raaphorst, including Brian Yuzna productions Faust, Dagon, and Beyond Re-animator and Paul Verhoeven’s terrific WW2 Dutch Resistance flick Black Book.

His first feature, it is ostensibly a found-footage film, posited around a propaganda film-maker attached to a Red Army scout unit making its way into Nazi-occupied territory in the final days of Stalin’s push on Berlin. The unit stumble across a village of massacred locals, where only an old man tending to animals appears to have survived. As he eludes their interrogation, they start to come across tunnels and rooms beneath the village that house a new kind of horror that even these battle-hardened soldiers are not prepared for.

The film went down a treat on the Saturday morning of this year’s Frightfest. On that marvellous Screen 1 it enveloped the audience nicely, with a nice sense of the wintry outdoors compared to the more colourful brick, rust and blood of the underground “factory”. Thumbnail characters sketched as much by clothes & weaponry as multi-racial casting lose their minds (one of them quite literally) as the action ramps up. The design of Viktor’s underground factory of terror and the way we encounter it specifically evokes the industrialisation of death seen across the death camps. 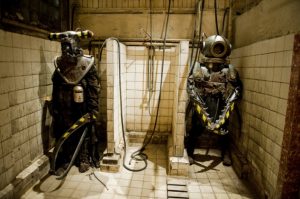 The director Q & A afterwards revealed him to be a man of passion, pushing to get his specific vision on-screen. The excellent half-hour making-of on the U.K. DVD further confirms this, showing how much practical effects work was involved. The up side of this is the film does not feel compromised towards to the usual needs of distributors wanting just another Nazi Zombie subgenre. The down side is that it suffers from a number of issues which affect the enjoyment of the film overall.

As with the majority of fiction films falling into this subgenre, the requirements to maintain the illusion of the documentary are hard to maintain. This has particularly bothered those concerned with the latter, as the period cameras and stock used in the film do not shoot in widescreen or in sync-sound. However, to others this is no more an issue then the technical ones which afflict many a film attempting to maintain a first-person “reality”. It was certainly not a concern in cinema, where the edges of the frame were beyond the individual’s vision, but it is more noticeable on DVD, particularly with the weaker colours on the disc.

The “found footage” perspective does feel like a producer-led mandate that the director embraced to provide structure around his particular vision – the bonkers production design is clearly where his interest lies, not the characters or overall plot. There is no real final act, with the tension provided by the encroaching bombardment constantly drooping as the characters push towards a glaringly-obvious “cynical” ending that could also permit a sequel, while being undermined by out-of-place laughs.  In fact, a lot of what does not work about the film can be attributed to a first-time feature director and a format that sometimes hinders traditional cinematic storytelling more than aid it.

So why watch it? What makes this still worth your time as a horror fan? Fans of Nazi zombies and dieselpunk will appreciate the production design and action without doubt. Fans of historical horror will appreciate how elements nod to the Holocaust without demeaning that tragedy, and the cynical ending nods to the real-life struggle between the Allies to appropriate Nazi scientists and research. Where the film really scores, however, is when the aforementioned qualities combine with the first-person perspective to achieve the effect of being in a first-class action/horror videogame. 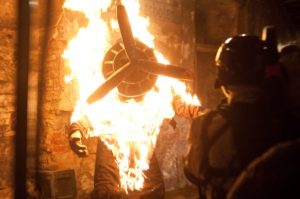 The design may nod to the Bioshock, Silent Hill and Wolfenstein franchises, but at least three sequences accurately replicate the feelings of terror induced by playing those games, amplified further by the inability to move out of these sequences given you the viewer are not in control.  Moving through the underground factory of death may not sustain a properly satisfying third act, but it does feel like moving through the levels of a game.  The centrepiece action sequence, involving the truly insane design Propellerhead, is so tense and scary that your blogger tried to grip a non-existant DualShock controller to manoeuvre himself out of it, and was terrified further by the fact that he had to wait for the director to choose to move him on out of the sequence.  No game-to-film adaptation has yet achieved the sensations in the viewer the games themselves do, but Frankenstein’s Army does, and that is something worth experiencing.

As previously mentioned, the U.K. DVD has an excellent making-of on it. However, the picture seems blander and bleached-out compared to the nicely atmospheric faux-16mm version projected at Frightfest, as if a series of filters had been switched on or the effect of the grading had somehow been lost in compression.  Certainly it makes one want to see the Blu-ray editions available in other territories to compare. The sound is still very good, however, but this is not given to massive subtleties in that area. Right now it is the only way to see it in the U.K., and well worth it, but if the chance comes to see it in a cinema, take it, as that is definitely the best place to experience what the film has to offer.