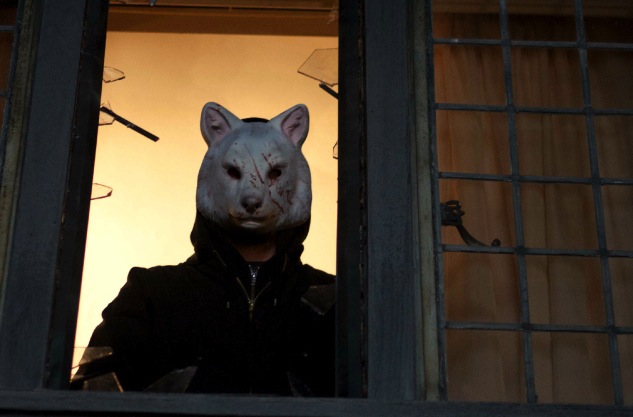 Opening witha couple in bed halfway through the horizontal fandango, it pays homage to a staple 80’s horror film moral that sex must be punished which they do at the hands of an unseen person(s).  From here the film picks up at the neighbour’s house , a sprawling country pile where the owners have arranged a celebratory meal with their grown up children and partners. Inevitably with family get-togethers  two of the brothers antagonise each other and the insults fly, shortly before crossbow arrows do the same from the same unseen killer(s). And Lo the carnage commences!

Comparison with Straw Dogs and especially 2008’s excellent  The Strangers  is inevitable but writer Simon Barrett  and director Adam Winyard have conceived an effective little horror with the gore quota noticeably higher, featuring some very creepy moments as the freaky faced masked marauders make themselves known.

Where it does gain is in its use of music, only occasionally overdoing it when shocks are emphasised with loud blaring trumpets, but the bubbling threat of lurking menace is compounded with an excellent glowering trumpet bassline – think of the opening scenes to The Shining and you’ll get the idea. It’s a credit to Winyard who also edits the film and the three other composers that the score compliments the scenes so well.

Despite a low budget there are some particularly gruesome deaths, especially one which finds a novel use for a kitchen blender, although there is some strangely orange looking blood in the aftermath. The script by Barret, who plays one of the killers ( Tiger face – grrr!) does have some weaknesses, (mobile phone signals don’t work, the family split up rather than stick together with inevitable results, and there’s a weak twist) although he does invert things nicely with the last man standing.  This is a solid feature whose sense of menace is dissipated a little once the killers are unmasked. Winyard is not in James Wan league just yet in terms of conjuring scares, but he is surely only a film away from a breakthrough success.

Right must go and get ready before my guests arrive for my masked ball – one of them wants to wear a hockey mask, another a white faced screaming ghost and one a mask made of leathery bits sewn together – as long as I remember to put the vol au vents in the oven what could possibly go wrong?