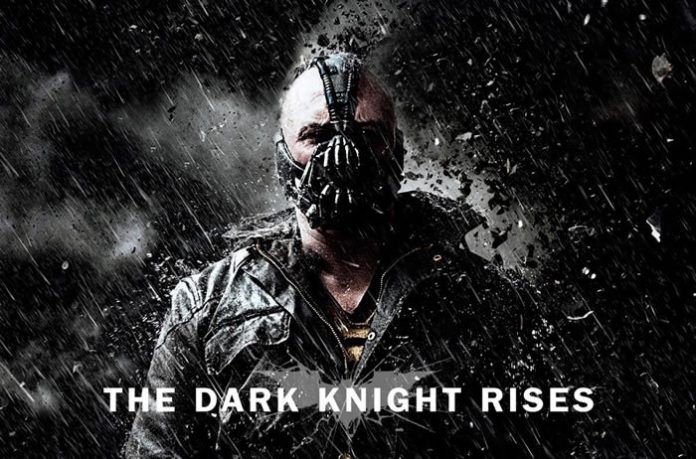 A billion dollars after Part Two, and the final chapter of Christopher Nolan’s heavily anticipated trilogy finally arrives. Much like fans’ expectations, its aspirations are high.

Picking up eight years after The Dark Knight, Bruce Wayne has become a recluse on an almost Howard Hughes level. Nobody bar his faithful butler, Alfred, has seen him since Rachel ( Maggie Gyllenhaal) died and the city believe him responsible for the death of Harvey Dent. It’s the appearance of Selina Kyle played by Anne Hathaway (oddly not referred to directly as Catwoman in the film) and a theft from Wayne Manor that instigates his return as the cloaked avenger.

His uncovering of a plot finds the very existence of Gotham City at risk from the psychotic musclebound villain, Bane ( Tom Hardy). Throw into the mix a young idealist cop ( Joseph Gordon Levitt) , an innovative Wayne enterprises employee (Marion Cotillard), Commissioner Gordon wrestling with his conscience about the truth behind Harvey Dent’s demise and you have a number of storylines competing for attention, and therein lies part of the problem. With four new characters as well as the regulars, some of them have little to do little to do, notably Morgan’s Lucius Fox who seems to have become Batman’s version of Bond’s ‘Q’.

With any comic book adaptation it’s the villain who sets the tone, and after Heath Ledger’s showboating as The Joker it’s Tom Hardy whose scarred physique and calm measured delivery provides, for the first time, both a physical and intellectual threat to Bale’s Batman. Where The Joker was an anarchist, Bane is an out and out terrorist. But as Hardy has a mask across his mouth for the film’s duration it’s clear his lines have had to be tweaked in post production. Frustratingly, at times he is nearly incomprehensible, which is a pity because this version of Bane is clearly head and shoulders above the cartoon buffoonery of 1997’s Batman & Robin’s incarnation. There really is a sense of dread when Batman first faces off against Bane. This is all further heightened by Hans Zimmer’s impressive score with its doom laden riffing of the chant heard in the trailer.

Other characters flesh out the storyline, most notably Anne Hathaway’s interpretation of Catwoman. Though nowhere near as overtly sexual as Michelle Pfeifer, she is still enjoyably duplicitious. Perhaps the most obvious missed opportunity is the hinted-at love triangle between Marion Cotillard’s Miranda Tate, Bruce Wayne and Selina Kyle. Oldman’s Commissioner Gordon clearly has a protégé in Levitt’s cop with integrity, John Blake, but this is a role which initially seems to be one of little substance beyond that of an idealistic young man caught up in circumstances beyond his control trying to fulfil his self-perceived destiny.

Nolan’s sombre treatment of the trilogy’s caped crusader has always relied on complex storylines and he has used this final instalment to build and expand on the foundations of its predecessors especially part one – ultimately coming full circle to round off the saga. The politics of the film even touch on the morality of upholding law and order, the fallout from hiding the truth and the consequences for actions taken by characters.

Throughout all three films Nolan has concentrated on character and plot over spectacle and extravaganza (and there is an especially effective action sequence including a midair hijack the likes of which we’ve not seen since Stallone’s Cliffhanger). Each film has been successively longer than its predecessor and The Dark Knight Rises comes in at a bladder-challenging 165mins. Perhaps a little bit of judicious editing would not have gone amiss, but Nolan has delivered a fitting finale to the saga. Hopefully he will keep true to his word that this really is the end and won’t be tempted back to add a fourth film.

At one point a character says, ‘ We’re in for a show tonight!’ On this point, he’s dead right.