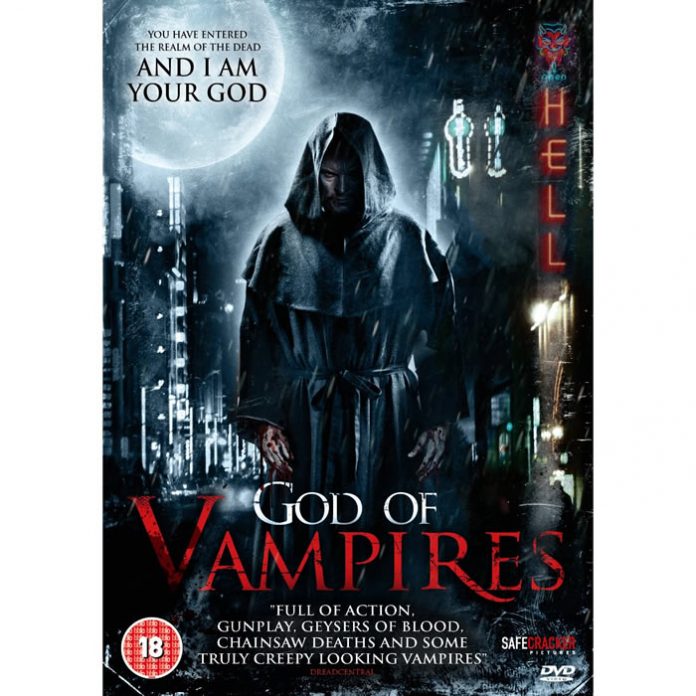 Blood fire extinguishers and authentic intestines. Sadly not items covered by Jeffrey Dahmer’s contents insurance, but gory instruments contributing to the special effects of God Of Vampires. It is pleasing to learn that this film used appropriate equipment to attack its violent conflagrations, a commitment to messy bloodletting made further admirable by boasts that the genuine abdominal article is preferred to latex sausages doused in ketchup. Whoever said that sitting through the end credits is a waste of mortal time?

But to go back to the beginning. Frank Ng is Chinatown’s number one contract killer: ruthless, professional, no questions asked, a kind of podgier Chow Yun Fat minus the charm. One day he is given a murky job that may harbour a better tomorrow: just a location and appointed hour for one million dollars. Turns out that both time and place happen to fall into the ‘wrong’ category once he disturbs the dodgy dealings of an age-old vampire. Consequently, everyone Frank comes into contact with is systematically destroyed or vampirised and our laconic hit man must gather additional firepower and ancient Chinese philosophy to vanquish the malefic spirit of the Orient rapidly turning him into Billy-no-mates. John Woo eat your heart out (authentic pig’s, naturally).

As far as heroic bloodshed goes, this is a pretty Olympian effort from make-up artist-turned-director Rob Fitz: python-like tongues are sawn in two, (100% real!) innards are ripped up through throats, chainsaws bring on a craze to do the splits. As befitting any overblown pastiche, the film benefits from occasional sprays of humour to temper the carnage (and the intensely wooden quality of the acting): the wise Uncle Ping keeps his primordial magic in Chinese takeaway cartons; when the demon asks his nemesis why he has no fear, Frank blankly replies it’s because he knows drunken-style kung-fu (if only I had thought to say that when recently asked if I knew of any reason why my brother should not get married).

Stylistically, God Of Vampires successfully marries the rapid cutting and split-screen violence of Hong Kong action cinema with the surreal design of the former colony’s horror flicks such as Mr. Vampire and Encounters Of The Spooky Kind- indeed, as Frank and his gang get closer to the ghoulish lair, the walls seem to be lined with sticky organic membrane as if entering a digestive tract. And running parallel to the genre clash is one of culture: there is none of the suave distinction of European bloodsuckers, for Oriental vampires piss blood from their eyes and have the complexion of one of Fulci’s undead children. Plus heartfelt stakes and headstrong decapitation are mere inconvenience to these monsters, yet a humble Post-It note decorated with elegant Cantonese script and stuck on their forehead will stop them dead.

Perhaps that is the moral of this slaughter-sodden fable: us Westerners have such violent means of dealing with our problems that we could learn from the Confucian way. A philosophy that also prizes organically-sourced fire extinguishers and the authenticity of offal for maximum special effect.