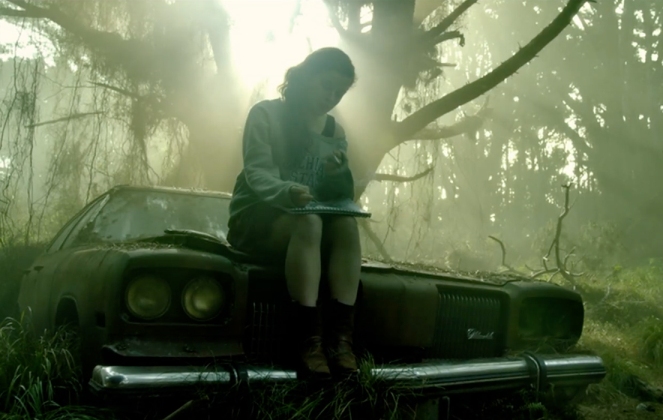 A remote cabin in the woods becomes a blood-soaked chamber of horrors when a group of 20-something friends unwittingly awakens an ancient demon in Evil Dead, the highly anticipated reimagining of Sam Raimi’s 1981 cult-hot horror film The Evil Dead. Starring Jane Levy (Suburgatory), Shiloh Fernandez (Red Riding Hood), Lou Taylor Pucci (Carriers), Jessica Lucas (Cloverfield) and Elizabeth Blackmore (Legend of the Seeker), Evil Dead is a bone-chilling film that combines all the raw excitement and gleeful gore of the acclaimed original with a series of shocking new twists.

Nobody understands the perils and pitfalls of Hollywood’s remake craze better than horror fans. Our devotion leaves us ripe for exploitation, and while there have been a handful of successful scare-flick revamps, the misses tend to considerably outweigh the hits. To earn a Dawn of the Dead, we need to tolerate a Nightmare on Elm Street, The Fog or House of Wax – just the tip of a role of shame that confirms we are more put-upon than any other genre fanbase.

So with entries to the horror canon seemingly immune from sacred cow status, it was only a matter of time until Sam Raimi’s little fright flick that could, The Evil Dead, returned to the silver screen. The micro-budgeted movie that introduced 80s rock ’n roll mayhem to the classical sensibility of sedate 70s horror influenced more wannabe filmmakers than anybody could have imagined, so the only surprise is that it’s taken a remake 32 years to surface. Thankfully this delay, along with the involvement of the director, producer and star of the original flick, have ensured that Evil Dead (that’s Evil Dead, not The Evil Dead – it seems clear that Raimi’s masterpiece remains the definitive article) is no hackneyed cash-in on an established brand.

The events of this redux retain the core concept of the original, with enough amendments and twists in the tale to hold the interest of the already-initiated. The biggest change is, of course, the jettisoning of a certain Ashley J. Williams; a decision that is wholly vindicated. Any young actor attempting to step into Bruce Campbell’s (little goody two-) shoes would be onto a hiding to nothing, and in the shape of Jane Levy’s Mia, this generation of Evil Dead fans look set to inherit a cult hero to call their own.

Mia is at the heart of the movie. A heroin addict in mourning for her mother, lost to a long and debilitating battle with Alzheimer’s, her absentee brother and three friends congregate at her family-owned cabin in the woods (not that one) for an intervention and program of cold turkey withdrawal. Never likely to be a weekend to tell the grandchildren about, Mia’s ordeal is made all the worse when one of her cohorts makes the bone-headed decision to read from an ominous-looking book found in the cabin’s basement. A book inked in blood and bound in human flesh…

Debutant helmer Fede Alvarez (also responsible for the screenplay, alongside Rodo Sayagues and an uncredited Diablo Cody) can take a bow. Drawing inspiration from the source material whilst mainly stamping his own identity on events (the mythology of the deadites and the Book of the Dead is greatly expanded here, especially in an enjoyable prologue), Alvarez may lack the distinct visual style of Sam Raimi, but so does pretty much every other director in the business. The Uruguayan excels at showing us just enough of the grisly sights – and make no mistake, around the halfway point of the running time Evil Dead gets very gruesome indeed – without fetishizing the grue. It takes a skilled pair of hands to ensure molestation from a tree does not derail a movie (yep, the libidinous shrubbery of the ’81 vintage has been ported over), and Evil Dead overcomes the frustration of occasionally idiotic character action to remain engaging throughout.

Aside from Alvarez, the main reason for this success is the aforementioned Mia. Jane Levy is a gifted comedienne with a wonderfully expressive face, and she changes genre gears flawlessly here to create a heroine immeasurably more interesting than the usual kick-ass ‘final girl’. In many respects Levy has to give multiple performances for the characters journey, and her eventual transition from angry junkie to steel-willed survivor is one of the finest arcs we’ve enjoyed in the genre for a while – whether widening her eyes in terror, undergoing physical hardship or undergoing a demonic possession-shaped transformation, it’s impossible to tear your eyes away from Levy throughout the running time.

The rest of the cast fail to make such an impression, but they are generally given less to do. Shiloh Fernandez is the best of the rest, suitably stoic and smouldering as Mia’s brother David, while Lou Taylor Pucci adds an element of emotional tension as embittered and unlikeable teacher Eric. Jessica Lucas and Elizabeth Blackmore are mostly relegated to eye-candy status, with the latter in particular largely ignored until she undergoes some serious deadite-sponsored punishment and enjoys a couple of genuinely amusing one-liners.

Where Evil Dead falters is in its determination to homage Raimi’s original while telling its own story. Key moments are all present and correct, and it’s testament to Alvarez and Sayagues that the presence of possessed hands, boomsticks, evil-cam shots of rushing through the woods and cellar-dwelling deadites do not feel like tired exercises in box-checking. However, for a spell in the final third the movie becomes a little too enthralled by its predecessors; camera shots, costumes, set pieces and even lines of dialogue are all lifted directly from Raimi’s romps. It’s the short lapse into kinetic camerawork that particularly jars, especially as it temporarily spirals the movie off into Evil Dead 2 territory, which feels out place with the tone of the rest of the flick. Thankfully the detour doesn’t last long before normal service is resumed; presumably Alvarez had a Raimi impersonation he simply had to get out of his system.

What this interpretation also lacks is any out-and-out scares (though ironically, given our complaints in the paragraph above, the bonus material shows deleted footage of Levy doing an uncanny – and scary as hell – impersonation of Betsy Baker’s Linda that we wish had stayed in the movie). There are a handful of effective popcorn-spilling jolts and jumps, but even when the blood starts to flow by the gallon at the hands of glass mirrors, meat cutters and nail guns and the horrors require an increasingly strong stomach, there is no ominous moment of tension that matches the sound of the log swing pounding against the door in the original. That’s not to say that Evil Dead descends into torture porn; merely that it’s more a showcase of gross-out violence than the ultimate experience in gruelling terror.

Unsurprisingly, presentation is the one area where Evil Dead indisputably blows its parent picture out of the water – the video transfer on this release is reference quality (though we’d wager the content dictates that most branches of Best Buy will stick with Avatar). Such bright reds and deep blacks mean that you could be mistaken for thinking some of the horrors on-screen were unfolding outside your window – though if that’s the case, we suggest you move house sharpish. The sound is also impeccable, with the mix keeping the dialogue clear and the bass of the ‘boo’-jumps suitably filling-rattling.

The Evil Dead has been repackaged and re-released more times than arguably any other movie (we reckon we’re on at least our fourth incarnation here at The Dark Side), so a cynic might suggest that we’ll be seeing this redux again in a box set sometime. On this release, the commentary track (featuring Alvarez, Sayagues and three members of the cast) is the undisputed highlight, with the rest of the package made up of featurettes. Making Life Difficult is a look at the physical commitment made by the cast and crew, with Directing the Dead shining the light on Alvarez. Being Mia offers a video diary from Jane Levy, Unleashing the Evil Force provides a look at the re-designed Book of the Dead, and rounding out the package is Evil Dead The Reboot, a traditional mini making-of.

It wouldn’t be fair to call these puff pieces, as they provide some welcome and candid glimpses behind the scenes of the filming of the flick (especially Making Life Difficult, which suggests Levy was physically tortured almost as much as Bruce Campbell on the set of Dead by Dawn), and the talking head segments offer occasional insight – we were particularly intrigued to hear that Campbell was resistant to the idea of a remake until it was confirmed Ash would not be recast. Overall, however, it’s the sheer enthusiasm and commitment of Alvarez makes the Evil Dead experience that little bit more enjoyable; it’s always refreshing to see a genuine fan attached to such a project.

Incidentally, supermarket chain Sainsbury’s is stocking a limited edition 2-disc version of the release, complete with interviews with Alvarez, Levy and Campbell, and a Q&A with the former duo. The whole disc weighs in at less than 40 minutes and involves some repetition so it isn’t worth going out of your way for, but any additional observations, no matter how minor, are always welcome.

The idea of remaking The Evil Dead may sound like sacrilege on paper but the reality is pretty groovy – it won’t be the best genre offering you’ll see this year, but it really could have been a lot worse. Fede Alvarez and Jane Levy make a promising team that may yet grow to echo Raimi and Campbell when the inevitable sequels surface. Hopefully these follow-ups will see Alvarez freed from the shackles of fan expectation and thrall to the original trilogy, leaving him to spin the franchise off in some new, interesting – and hopefully frightening – directions.