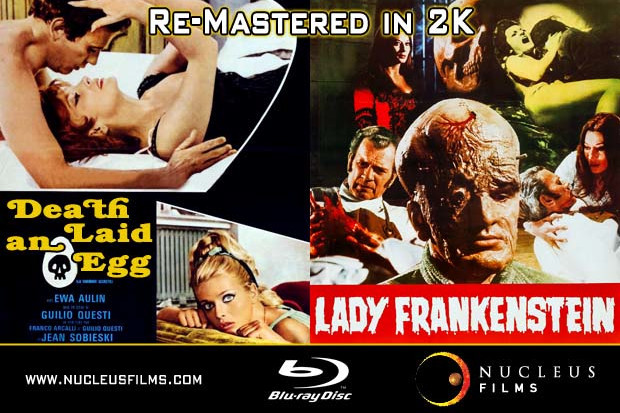 Those of you who picked up the latest issue of Dark Side can’t fail to have noticed our full page ad regarding The Nucleus Films Euro Cult Cinema Restoration Project. The Nucleus lads needed to raise £20,000 for super duper Blu-ray restorations of Lady Frankenstein and Death Laid an Egg, and I got in early to pledge £25. Since the £20,000 target has now been reached, that means I’ll be getting both of these titles for just £12.50 apiece, quite a result I reckon, but when the magic sum of £25,000 is reached the discs will also contain lots of juicy specially filmed extras, something these guys are especially good at. If you haven’t pledged yet, don’t miss out because time is running short. And to help you make up your mind they have just added a new Top Up Perk

Remember to tell your friends that anyone joining the Euro Cult Project now is guaranteed to get both “Lady Frankenstein” & “Death Laid and Egg” Blu Rays with limited edition Slip Cases & Post card Sets & their name in the restoration credits :