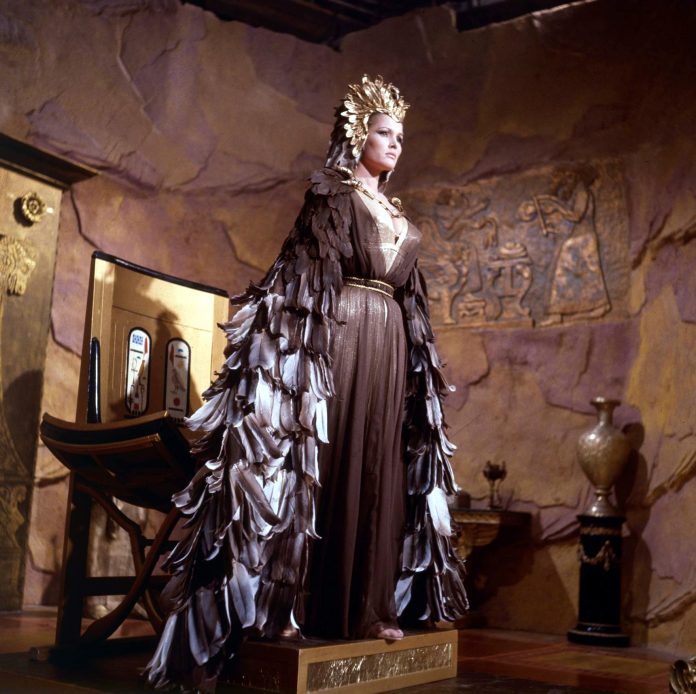 THE A-Z of Hammer Hotties!

We’d like to present our own tribute to the gorgeous gals who livened up many a vintage chiller, starting with A-D!

A is for Ursula Andress…
Born in Bern, Switzerland on the 19th of March, 1936, Ursula is a former artist’s model who shot to fame in the first Bond movie, Dr. No, as the lovely Honey Ryder. The actress was actually dubbed in her breakthrough movie role (by Monica van der Zyl), but it wasn’t her acting skills that were under scrutiny here. The scene where she emerged from the sea in a skimpy bikini cemented her place as one of THE sex symbols of the 60s.
After Dr. No Ursula went off to the States to star alongside Elvis the Pelvis in Fun In Acapulco (1963), but it wasn’t until Hammer signed her up for She (1965) that she got her first starring role. Hammer’s colourful version of the Rider Haggard favourite was shot in Israel and Ursula played the title character. She certainly looked the part, but since she couldn’t act as well as she could fill out a bikini (she was again dubbed by the same actress who did her voice in Dr. No), just to be on the safe side Hammer filled out the rest of the cast with a host of great character players and their usual horror stock company of Christopher Lee, Peter Cushing and Andre Morell.
The film was launched with a publicity campaign that called Ursula “The most beautiful woman in the world.” When questioned about this, she coyly replied, “I don’t say myself that I’m the most beautiful woman in the world, but I know I’m not ugly.” She also helped promote the film’s 1965 release by posing nude for Playboy!
The actress went on to appear in the high profile Hollywood blockbusters The Blue Max (1966) and Casino Royale (1967), but her film career didn’t really stretch beyond the late 70s when she could be found in sex movies like The Sensuous Nurse (1975) and the notorious video nasty, Prisoner of the Cannibal God (1978). 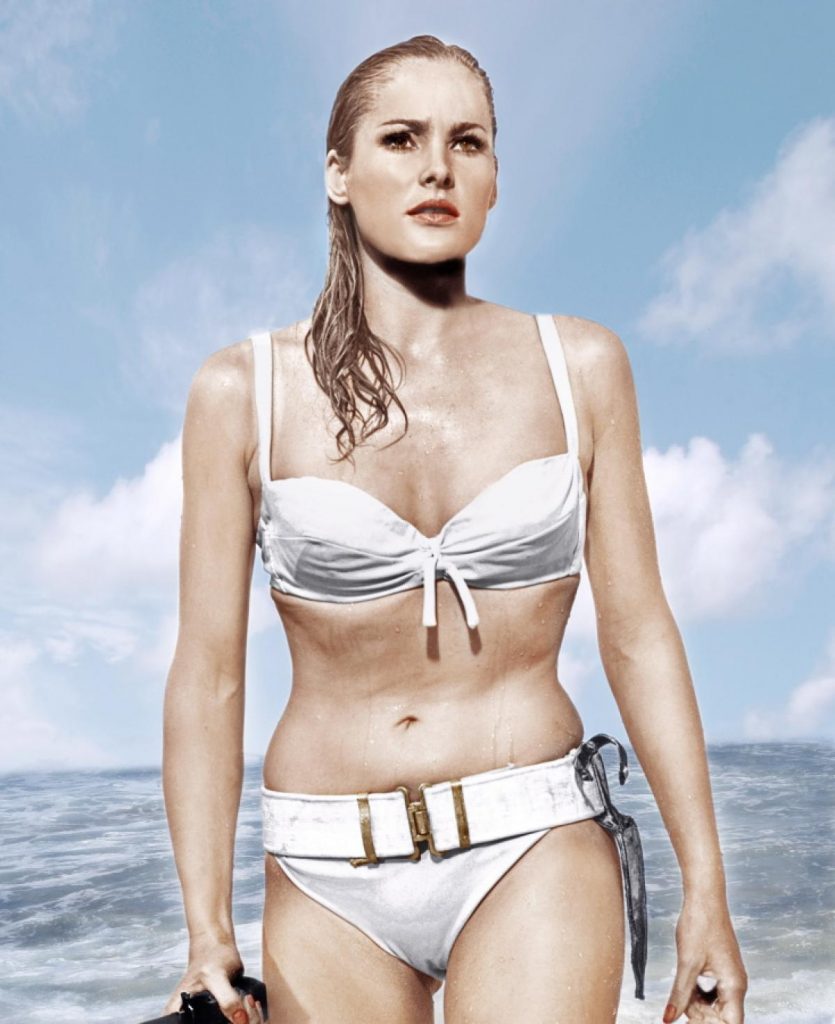 B is for Stephanie Beacham…
Yes that’s right, she of Celebrity Big Brother fame. Born in Barnet in Herts on 28th Feb 1947, the still-glam Brit actress studied at RADA and got her first TV break in an episode of The Saint directed by Hammer regular Roy Ward Baker. She was snapped up by Hammer for Dracula AD 1972.
It always seems to me to be a bad move to put a date in a film’s title, but few films have dated as badly as this awful Hammer horror. Basically, a bunch of thirty-year-old teenage “hippies” start messing around with black magic and bring the Count back to life again. Lee then hunts down the (luckily all female and pretty) relatives of the man who out a stake through his heart and puts the bite of them. But luckily good old Peter Cushing is around to sort him out before the ridiculous “trendy” dialogue sends the viewer screaming mad. This is a classic example of where Hammer went wrong in the 70s – a movie with no atmosphere, a very poor script, and a complete lack of understanding of the so-called youth audience. But Stephanie still looks hot in it.
The actress also appeared in the Amicus production of And Now The Screaming Starts (1972), and opposite Marlon Brando in Michael Winner’s The Nightcomers (1971), but her main claim to fame came on the small screen, where she starred in the cult POW drama Tenko and in the glossy soap operas Dynasty and The Colbys. Later she appeared in Bad Girls and Coronation Street, the latter playing a love interest for elderly regular Ken Barlow. 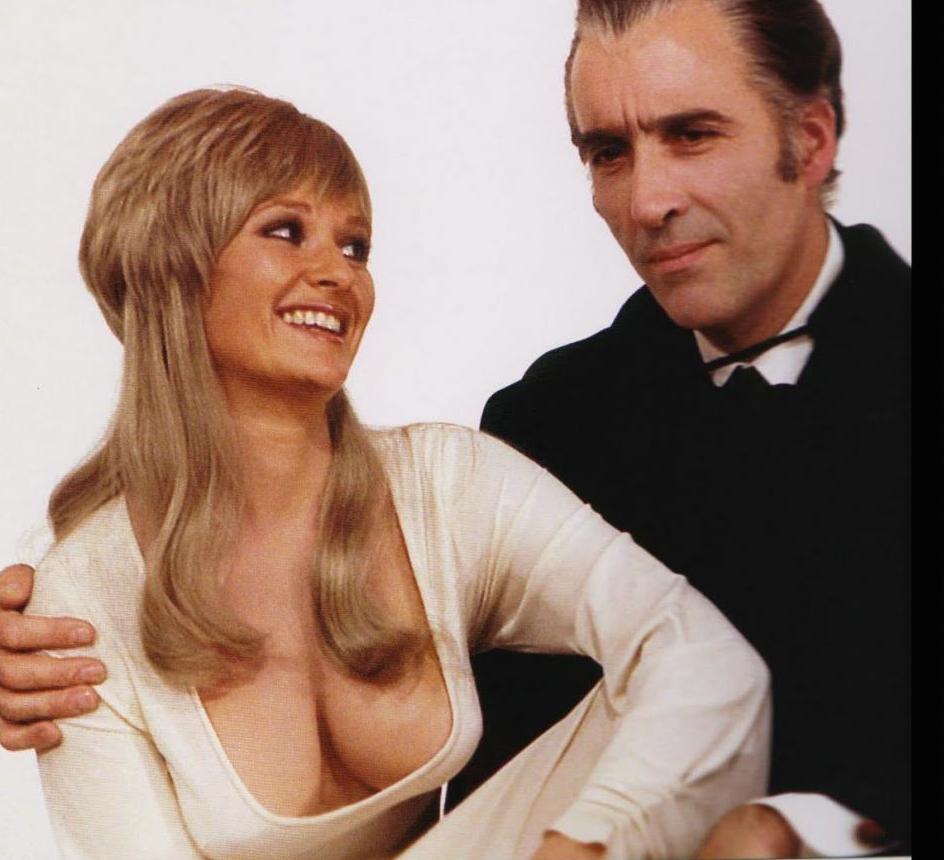 C is for the Collinson Twins…

When Hammer decided to make their sexy 1970s vampire movie, Twins of Evil, the most important bit of casting was obvious. Born in Sliema, Malta, on 22nd July 1952, Mary and Madeleine Collinson hit the newspaper headlines when two lovestruck teenage boys crashed their scooter when they spotted them walking arm in arm down the King’s Road. In 1969 they were talent spotted by Playboy and became the magazine’s very first centerfold twins – Misses October!
It was thus almost inevitable that Hammer should snap them up for Twins of Evil. They played a pair of orphans who come to visit their God-fearing uncle Peter Cushing who happens to live near the vampire-infested Castle Karnstein. One of the twins gets curious and has a look round the place, in the process getting bitten by handsome young bloodsucker count Damien Thomas. The twin then turns into a vampire herself and starts preying on the villagers, but in a neat twist it’s her good sister who gets the blame! It was quite nicely done, and at least the Collinsons had some acting ability to go with their fantastic looks!
They wore matching mini-skirts to the film’s premiere and the film helped their modeling career immensely. However, Twins of Evil was to be the last movie they ever made. They went on to appear at fan conventions, however. Fans of the pair might also care to check out the new BFI Flipside release, Permissive, where they can be seen in minor roles. Other movies the twins appear in are: The Love Machine (1971), She’ll Follow You Anywhere (1971), Groupie Girl (1970) and Some Like It Sexy (1969). Sadly Madeleine died in hospital in Malta in August 2014 at the age of 62, with her sister by her side. 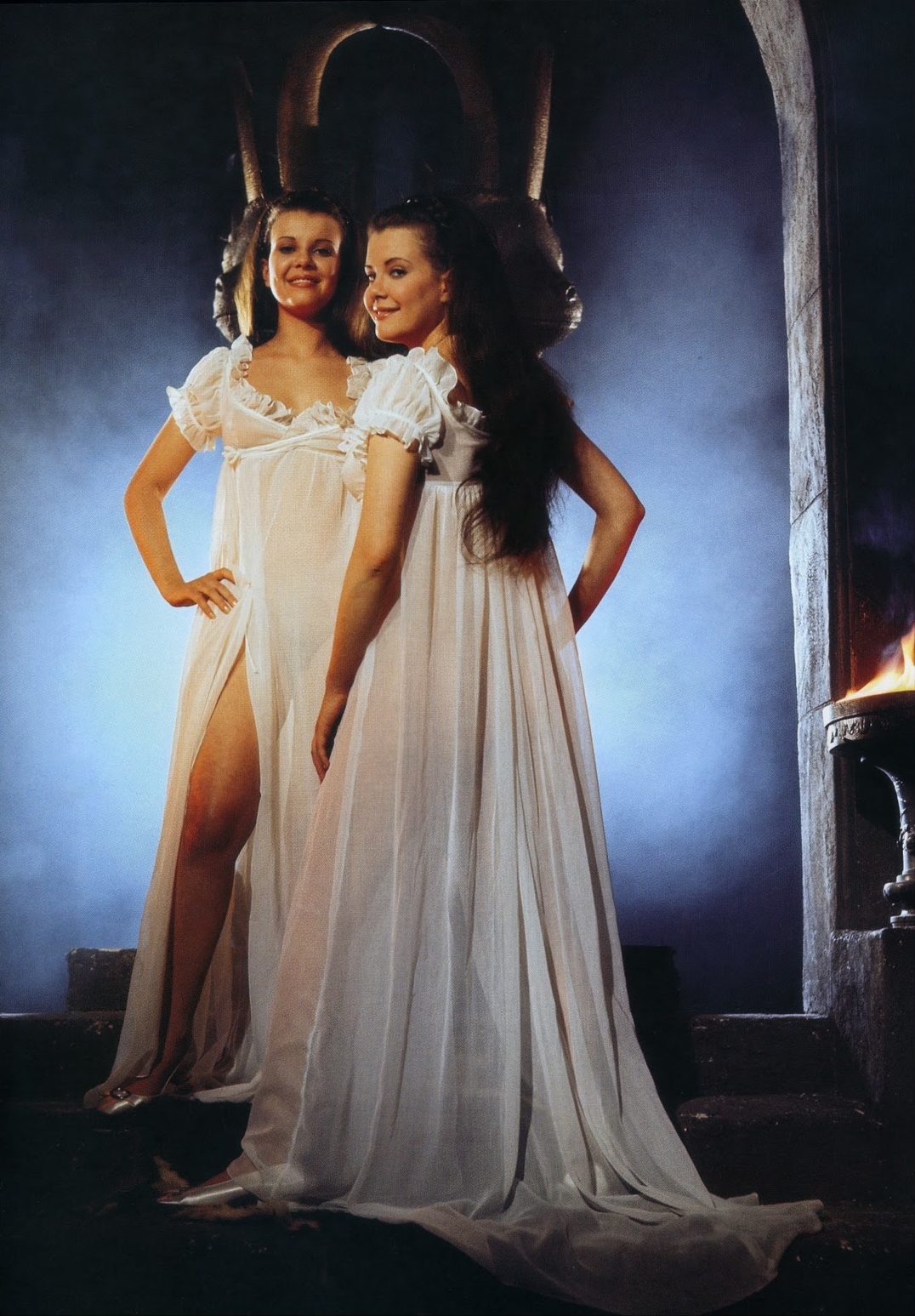 D is for Susan Denberg…

Susan Denberg achieved Hammer icon status when she starred in Hammer’s 1967 movie Frankenstein Created Woman. The lovely blonde was born Dietlinde Ortrun Zechner in Poland on 2nd August 1944 and brought up in Austria where her father ran a chain of electrical shops. She moved to London in 1962 and worked as an au pair. Eventually she became a Bluebell girl and an actress, with a part in the movie of Norman Mailer’s An American Dream. After a role in the Star Trek show, Mudd’s Women, she posed topless for Playboy and it was here that she was spotted by the Hammer bosses… do you see a pattern emerging here? Miss August, 1966, soon became the star of Frankenstein Created Woman, the fourth in Hammer’s Frankenstein cycle.
This one found Peter Cushing dabbling in the Faustian area of soul transference, which seems like a better bet for success – after all, you can’t ruin a soul in a jar by having your hunchbacked assistant drop it, can you?
This time round Cushing transplants the soul of an executed young man (Barry Warren) into the body of the lad’s female lover (Denberg) who committed suicide after her beau was killed. To make life easier for his new creation, he even uses a bit of plastic surgery to turn the once-ugly girl into a ravishing beauty. But things quickly turn nasty as the girl uses her newfound powers of seduction to seek gruesome revenge on those who brought about his/her unjust execution. Released on a double-bill with The Mummy’s Shroud, this is a fairly enjoyable addition to the series with some atmospheric scenes and a plot that holds the interest.
Denberg’s voice was dubbed in the film and she didn’t go on to achieve further fame, unless you count her offscreen activities, well chronicled in the News of the World at the time, involving torrid affairs with the likes of Charles Bronson, Sidney Poitier, Jim Brown and Roman Polanski. She was also into drugs and a party lifestyle and lost out to Marianne Faithfull on the lead role in Girl On A Motorcycle after she was rushed to hospital with a drug overdose. She ended up in a clinic in her hometown and for many years it was rumoured that Susan had committed suicide. However, it is now thought that she just retired from the business and lives a quiet life in Austria. 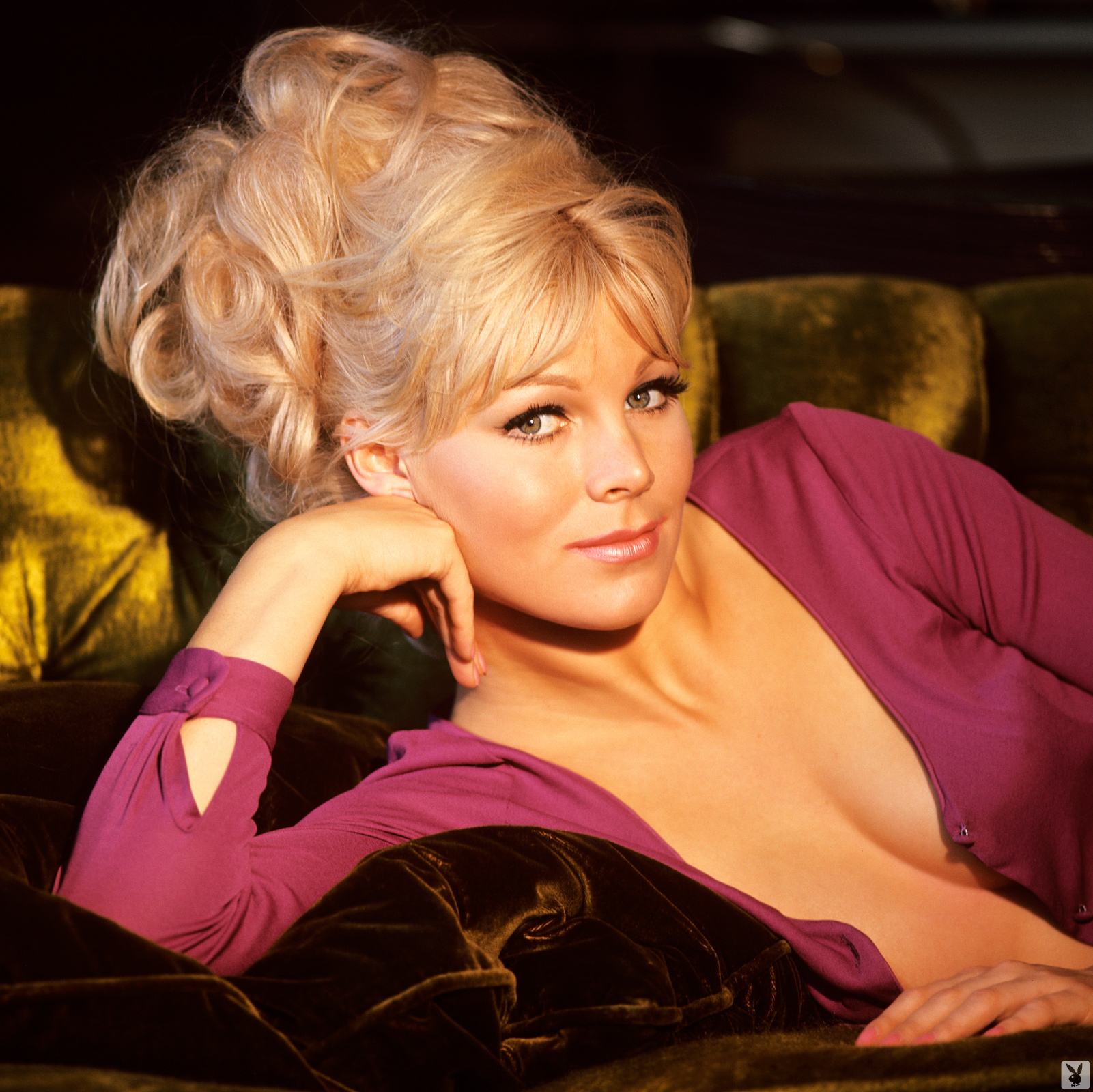