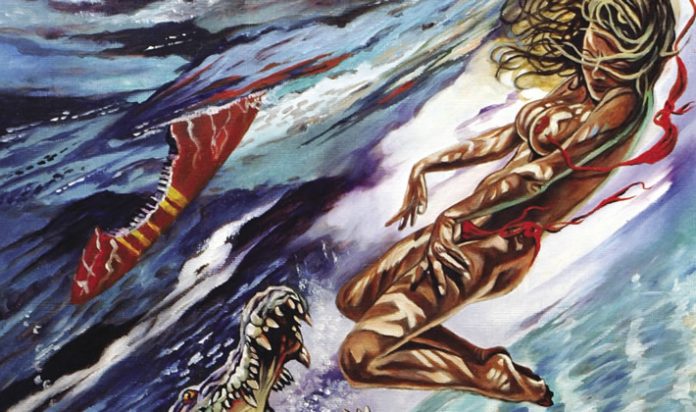 I’ve been letting you guys off the hook of late, slipping you the odd slightly dodgy Hammer film instead of leaving you to swivel on a big fat length of Sy Fy which, let’s face it, is what you all deserve. I haven’t been merciful for any altruistic reasons of course. It’s simply that Hammer Horror paintings sell and Sy Fy movie paintings don’t. Swamp Shark for instance, fetched only half what a 1937 sheet of Izal toilet paper did on Ebay last year, despite being twice as absorbent. Still, this column is devoted to bad movies so I’ve had to bite the bullet and produce yet another piece of art destined for either oblivion or a really big wipe. If I’m going to suffer so are you, so squeeze into that Speedo, assume a squatting position and get ready to bellyflop into… Blood Surf!