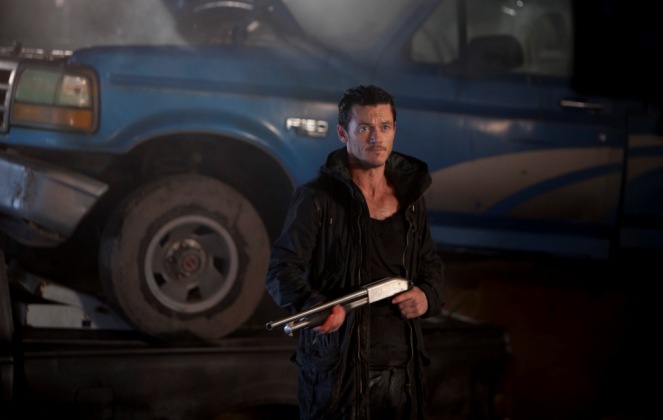 The 14th Film4 FrightFest in London felt renewed, as if the organisers had looked at the genre and what it has been going through since the last event, and having taken stock, curated a selection that showed it to be in rude health. Films this year showed that filmmakers have been examining the genre itself, looking at the work of those around them as well as their own, and coming to some clear conclusions. The beneficiaries of this reflection? The fans.

The throughline this year was quality. Better film-making, better acting, more interesting stories being told or interesting variations on standards. If last year felt like a fight between 70s prog rock and modern manufactured pop, this year felt like experienced musicians showing us talent and range, whatever the genre or subgenre, all performing well regardless of how fans reacted. Conversations in the foyer, when negative, often still included phrases like “… but it was still well-made” or “it was still well-acted” and other such comments.

The following twelve films screened in the main screen proved to be representative of this careful curation.  There was an interesting visual throughline between trippy opener The Dead 2: India, druggy Brit horror Dementamania and shroomy Hammer of the Gods.  The first two divided viewers, but were thoroughly well-made with a fierce sense of independent film-making about them.  The Ford Brothers took their vision of World War Z (the book, not the film!) further, using Rajasthan to open up their canvas and deliver horror with real heart while still generating thrills and spills in both daylight and the darkness of night.  The action was ramped up from The Dead without ever turning into a full-on action-horror, while the soundtrack nodded to Mychael Danna and the editing to a more trance video style.  A few key performances held up the script’s ambitions over some first-time actors who improved over the course of the film, and the climax combined emotion, spirituality and grim political expediency, in true Romero fashion.

Dementamania was basically Trainspotting meets Fight Club meets The Fly with a solid central performance by Sam Robertson of Corrie and Beaver Falls as the city boy going slowly nuts after stepping on the sting of some sort of engineered wasp.  Surrounded by the experienced likes of Geoff Bell, John Thomson, Vincent Regan and Kal Penn, who contribute to the unease with chillingly ordinary performances, Robert van Twillert and Anouska O’Hara adding to the surreality, and Hollyoaks‘ Melissa Wells and Emmerdale‘s Rebecca Reaney as two very different kinds of women in his life.  Director Kit Ryan and and writer Anis Schlewet have a really good tale together here, nicely paced, with shades of Clive Barker in the bloody tableaux that punctuate the tale and a pounding dance soundtrack.  The film only falls at the final hurdle, where it opts to pull back rather than dive in full-blown.  Still well worth seeing.

Other first-time directors also showed promise, including Dutch storyboard artist Richard Raaphorst, who delivered a genuine twist on the Nazi zombie subgenre with WWII found-footage shocker Frankenstein’s Army.  The majority of the acting was merely ok, with the character twist obvious a mile off for those who’ve seen enough thrillers with Soviet characters grouped together in them, but once Karel Roden turns up he nails the tone the rest should have sought. There are several mis-steps attributable to first-time direction, but what works does so spectacularly well: the truly bonkers creature design and effects (all practical – even the Propellerhead!) by way of Silent Hill  and Bioshock, and the editing of the first-person sequences in combat.  At least two sequences were so good at replicating the feel of being trapped in a fight in one of the aforementioned videogame franchises, your blogger here found his hands trying to grip a non-existant Playstation controller to get themselves out of the situation.  The fact that he had to wait for the director to choose to move the sequence on only increased the tension and made it more harrowing.

Low-budget Brit Viking actioner Hammer of the Gods, on the other hand, was criminally dull, which, given the ingredients and the valiant efforts by experienced TV genre director Farren Blackburn to enliven it, was a crying shame.  For a first-time director he brought polish and pizazz to what was clearly an incredibly basic shoot, but his actors are convinced that they’re in the kind of DTV actioner that appeals to white skinheads who think watching two half-naked gym-toned blokes wrestling (supposedly to resolve a fraternal conflict for kingship) is the height of manliness, reinforced by the mostly pointless deaths of almost all the female characters. History simply doesn’t get a look-in anywhere other than in the production design and costume work.  Glynis Barber turns up briefly at the end to show the rest of the cast how it’s done, but too late to save matters, and the film becomes exactly what the cast have dragged it down to.  The shelves of ASDA await.

Elsewhere experienced directors showed that when they get back to lower-budget basics they make better films lacking blockbuster bloat.  Finn Renny Harlin, Swede Lasse Hallstrom (an Oscar nominee no less!) and American Stephen Sommers – yes, that Stephen Sommers – all made solid genre entertainments that relied on basics: decent acting, excellent location work, great cinematography, and restraint with effects.  Harlin’s The Dyatlov Pass Incident was a decent found-footage X-File enlivened by trademark snowbound location work, direction and filming way better than the subgenre allows for usually, and a solid, emotional twist.  Hallstrom brought the great Lena Olin back on-screen as part of a cracking ensemble for Nordic Noir adaptation The Hypnotist, from the novel by Lars Kepler.  The initial crimes were gory enough to warrant the film’s inclusion in the festival, but it settled into more traditional Nordic crime sequences thereafter. Olin’s character work in the film is so fierce it throws everyone else into relief, but the cast are all up for the challenge, the mystery is satisfying enough and the climax superbly handled.  Finally, Sommers goes indie and adapts Dean Koontz‘s novel Odd Thomas as a pulpy horror-actioner in the classic mould.  While Deep Rising remains his best film, this comes a close second, with a riveting central performance from Anton Yelchin and great support from Willem Dafoe, Brit Gugu Mbatha-Raw and Ashley Sommers.

Finally, there were the old reliables.  Adam Green handed over the reigns to Walking Dead DoP B.J. McDonnell for Hatchet III, who gave the fan-favourite series the perfect action-packed, gory send-off, easily the best of them all.  The less you know the better to be able to enjoy the cameos, in-jokes and performances. Ryuhei Kitamura provided some of the most fun of the weekend with WWE’s No One Lives, in which Luke Evans took his F&F6 bad guy routine, plays with it, then refines it into a killing machine of Terminator-esque proportions.  Rock-solid B-movie thrills with a dose of Kitamura style.  Jim Mickle mined further some of the themes of his excellent Stakeland in the remake of Mexican cannibal film We Are What We Are, an original Frighfest 2010 entry.  His new one had ambiance, acting and grim Southern Gothic atmosphere to spare, but faltered at the final hurdle in some ways. Still, an intense experience that felt like the horror flipside of TV show Justified.  Robert Schwentke returned to the screen, after his excellent German debut Tattoo played Frightfest in 2003, with big-budget Dark Horse Comics adap R.I.P.D. in 3-D no less.  Trailing damning U.S. reviews and box-office the film was nowhere near as bad as made out, if fairly by-the-numbers.  Jeff Bridges seems to be having more fun here with a similar character than he did in the over-rated True Grit  remake, while everyone else understands they’re in a Men In Black/Ghostbusters mash-up and get on with it accordingly.  If you liked 90s Dark Horse Comics adaps such as Timecop and The Mask then you’ll enjoy this.

Finally, ace Canadian auteur Vincenzo Natali, a festival regular (Cypher in 2003, Splice in Glasgow 2010), supplied one of the strongest entries of the weekend, Haunter.  A ghost story in the current mode, it is, alongside The Woman in Black, the perfect gateway horror film for teenage girls getting into the genre, the best since the days when Year 8s used to borrow their older brothers’ copies of Scream.  Abigail Breslin commands the screen with first-class support from genre and TV stalwarts, and together with Natali offers us, in the best sense possible, Nancy Drew: The Haunting.  Turning the traditional serial killer thriller narrative on its ear, Natali provides us with not just a strong heroine but a film in which female victims transform their own status rather then be spoken for by men.  All those older horror fans annoyed their younger sisters/cousins/nieces/etc. are only seeing badly-made or watered-down genre films can show them this with pride, as well as enjoy it themselves.  First-class film-making that helped crown a first-class weekend, and by serving as a genre entry point will ensure a steady supply of future Frightfest attendees.