Nipped down to Shepperton yesterday to interview Vera Day. Do you remember her? She was strangled by Boris Karloff in Grip of the Strangler, got an alien parasite on her face in Quatermass 2 and was menaced by a monster tree in The Woman Eater. One of my favourite movies of hers is Too Many Crooks (1961), a wonderful old British comedy with Terry-Thomas and Sid James. She tells me that Terry-Thomas was on the sauce quite heavily and had to do all his scenes in the morning before a lunchtime session laid him low. Vera told me some great stories about Val Guest and his troublesome wife Yolande Donlan, and an amusing anecdote about a day out with Val and Brian Donlevy on Quatermass. If you didn’t think Brian had a sense of humour, his comment about Val’s wife will change your mind. By the way, contrary to reports, Vera says she never saw Donlevy drunk and didn’t know he wore a wig! It’s a great interview and all I have to do now is type it up for issue 184 of The Dark Side – 183 is already done folks and it could be one of our most amazing issues ever, especially if you love Hammer TV.  By the way, thanks to everyone who has been sending in letters of late, and we have now expanded our letters pages to four each issue so keep writing in, please. British genre mags are on the increase as the American ones are going to the wall. Look out for Denis Meikle’s new mag about the Fabulous Fifties – I have just written a feature entitled Invasion of the Sex Kittens for issue two, and you should get a non-PC chuckle or two out of my my Pinups In Peril in issue 1. Oh, and our new sci-fi mag is officially launched on April 27th and will be out every six weeks from then on, the same day as Dark Side. There’s a lot of Cushing, Italian sci-fi, Blade Runner and cult TV stuff in it, so Dark Side fans should take a look too. Finally, watched Doctor Strange last night and enjoyed it, great effects and some well placed laughs. Mads and Benedict too, result. Don’t forget to watch The Bill episode of Inside Number Nine on catchup and of course the last episode of Taboo tonight. Deep joy. 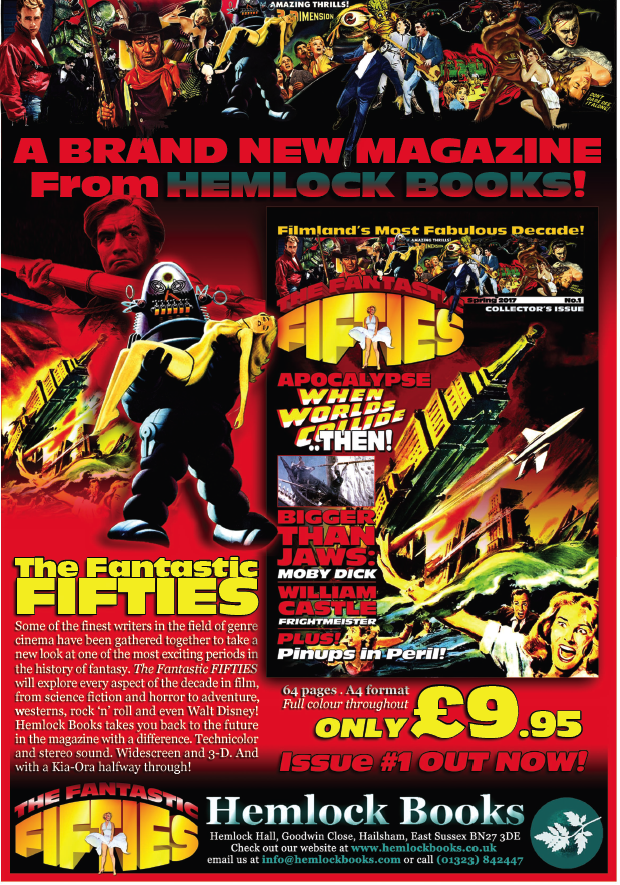