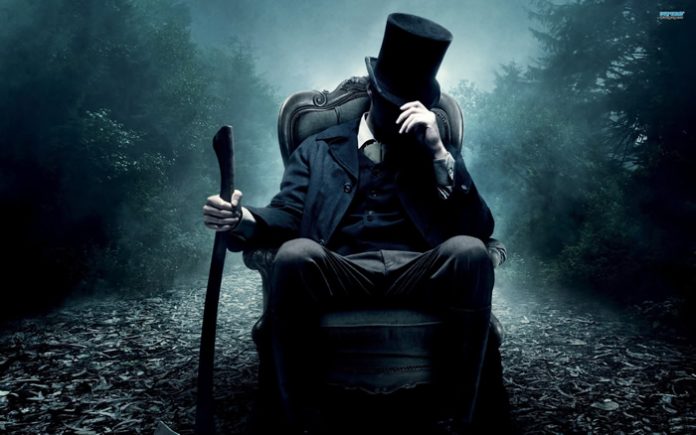 Published in 2010, the comic book novel Abraham Lincoln : Vampire Hunter was another mash up in the vein of the same author’s Pride And Prejudice and Zombies and even though the genre was, even then, arguably past its prime, Hollywood has decided to film it. With a Russian director. In 3D.

As a child, the later to be 16th President of America sees at first hand the effect of slavery, shortly followed by the death of his mother at the hands of a vampire – thereby instigating his lifelong fight against these twin evils. He is befriended by Henry Sturges ( played by Dominic Cooper) who tempers Abe’s lust for revenge and channels it into training him to use a silver-edged axe/shotgun combo for the purpose of decapitating vampires.

With Abe’s training complete (cue the tried, trusted and tired ‘training montage’) he ventures out into the world where he gets a job as a sales assistant in a shop (no, really) before sending Abe the names of vampires that he must kill. Along the way he becomes President (as you do) whilst at night he terminates vampires with extreme prejudice. At the same time a Vampire played by Rufus Sewell (looking increasingly like Ian McShane) attempts to lead all vampires to enslave the people of the US. His name casts fear and terror across the nation. For he goes by the name of…. Adam ( yes, really). Only honest Abe can end slavery and end the vampire invasion.

The film has regrettably been scripted by the source novels author , Seth Grahame Smith, whose slow narrative, superflous characters, ponderous plotting and nonsensical plot twists made Dark Shadows such a disappointment. The densely plotted novel has lost a lot in its transition to screen and for no discernible reason gained characters that weren’t in the book.

Thankfully a weakened script is enlivened no end by the Russian Director, Timur Bekmambetov, whose dizzying camerawork and truly insane set pieces made, Wanted, Daywatch and Nightwatch so distinctive. All the director’s flourishes are present, action lovingly caught in slo-mo, frenetic and gravity defying set pieces, gallons of blood liberally sloshed across the screen and inventively bloody deaths – all in 3D. In the past his setpieces have been nothing less than utterly bonkers but here he seems to be reining it in somewhat, although a Vampire chase amongst a stampede of charging horses will probably lay claim to being the most insane action scene we’ll see in this Summer’s releases.

But frenetic directing still can’t cover up a script which desperately needed polishing. It does grind momentarily to a halt about two thirds of the way in when the US Civil War, the Gettysburg Address and other such political gubbins rear their head . Using vampirism as a comment on emancipation doesn’t entirely work either. None of the actors get much scope to flex their acting chops here. Rufus Sewell comes out worst as Lincoln’s adversary and his role is so woefully underwritten that you wonder if there’s not a whole load of his scenes on the cutting room floor. Benjamin Walker has the best of it as Lincoln with more of a character arc, but even then it’s difficult to reconcile his displays of modest integrity with the savage blood letting that takes over his character when he’s beheading vampires in loving slo-mo with an ever twirling axe. The film covers 45 years but by the time he’s President, having donned that moustache-less beard, he looks very much like Liam Neeson.

As comic book movies go it’s certainly not Catwoman bad but neither is it Dark Knight good either and it’s saved purely by its frankly ludicrous but highly enjoyable set pieces which make better use of 3D than many of its ilk usually do. Blending a heavyweight historical figure with classic movie monsters is an entertaining enough idea and if it is a success then surely there must be more in a similar vein to follow. Mother Teresa: Bounty Hunter anyone?